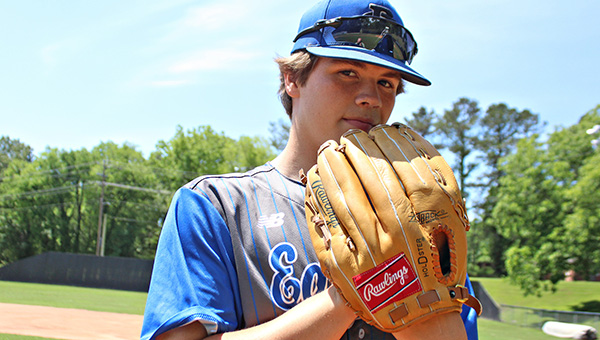 Porter's Chapel Academy's Gage Palmer is the 2022 Vicksburg Post baseball Player of the Year. Palmer, a sophomore pitcher and infielder, batted .364 this season and had 105 strikeouts in 72 1/3 innings. (Ernest Bowker/The Vicksburg Post)

When they started to percolate up to the varsity level and find their way into the starting lineup last season, big things were predicted for Porter’s Chapel Academy’s young baseball players.

The group of then-freshmen had played together for years on the travel ball circuit and seemed to just need some growth and seasoning to succeed on the high school level. That process happened a little bit faster than anyone expected.

PCA had a breakthrough season in 2022, finishing 17-8 and advancing to the third round of the MAIS Class 3A playoffs, and leading the charge was an emerging star in Gage Palmer.

Palmer, a sophomore pitcher and shortstop, was the Eagles’ ace on the mound and one of its best hitters at the plate. For his big role in the team’s success, Palmer is also the 2022 Vicksburg Post baseball Player of the Year.

Palmer is the first PCA player to win the Post’s award since Montana McDaniel in 2009. It had been almost that long since the program had had any measure of postseason success.

PCA hadn’t won a playoff game since 2015 or a series since 2011. Palmer helped end both of those streaks with strong pitching performances. He had 14 strikeouts against DeSoto School in the first round, and pitched six innings but got a no-decision in the second round against Calhoun Academy.

PCA won both of those games and swept both series. The Eagles lost in three games in the third round vs. Benton Academy, but Palmer pitched in all three games. He earned a save in Game 2, then turned around and went 4 1/3 innings in Game 3 before tiring.

Palmer wound up with a 6-4 record and two saves this season, with 105 strikeouts in 72 1/3 innings. He had nine strikeouts or more in seven of his 12 starts and went six or more innings eight times. The right-handed workhorse threw 100 pitches or more in each of his last six starts.

“My fastball was on, but I had more of a change-up to rely on this year and not just a curveball. The curveball wasn’t on most times, but I had my change-up and my fastball which really helped me,” Palmer said. “Going into the harder teams, I felt like I had a lot on me to keep us in the game as much as we can to get a lead and work with a lead. I like it. But sometimes it was a lot on me.”

Palmer wasn’t just a pitcher. He played shortstop when he wasn’t on the mound and only made three errors in 111 total chances. He had 10 multi-hit games and finished with a .364 batting average.

“I had my off games, but I did all right,” Palmer said. “From last year, I didn’t hit as well as I did this year, so I feel like if I get in the summer and work some more I’m going to come out a lot better next year.”

Palmer has plenty of high school baseball ahead of him, but is already starting to gain some attention around the state. He played in the MAIS Futures Game — an all-star contest for underclassmen — in May and was named to the All-MAIS Class 3A team as a utility player.

It’s all given him a shot of confidence he hopes to carry on to bigger and better things in the years to come.

“I didn’t expect at all to get it this early. But getting it this early gives me a lot of confidence,” Palmer said. “I feel like if I keep showing out I’m going to have more people notice me and I may get offers to colleges — hopefully. As long as I keep my head and stay humble I can work through anything.”