Rebels roll past Southern Miss in Game 1 of super regional 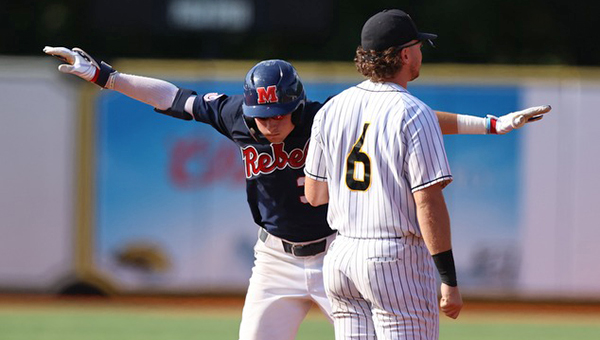 HATTIESBURG — One of the biggest baseball parties Mississippi has ever seen turned into a bit of a snoozer thanks to Ole Miss.

The Rebels exploded for seven runs in the top of the sixth inning, Dylan DeLucia pitched 5 2/3 scoreless innings, and Ole Miss hammered Southern Miss 10-0 in Game 1 of the NCAA Tournament’s Hattiesburg super regional on Saturday.

“Ole Miss just played a much better game than we did, all the way around,” Southern Miss coach Scott Berry said. “We just didn’t do enough in any phase of the game today to compete with a good team like they are, especially the roll they’ve been on.”

Game 2 of the best-of-three series is Sunday at 3 p.m., and will be televised on ESPNU. Southern Miss (47-18) needs to win that one, and then again on Monday, to advance to the College World Series for the first time since 2009.

Ole Miss (36-22), meanwhile, can put aside years of super regional frustration with one more victory. The Rebels are in the super regional round for the eighth time in 17 years, but their only trip to the College World Series came in 2014.

Of the six super regional losses under head coach Mike Bianco, five have come in series that went the full three games — and three of those were after the Rebels won the opener.

“I don’t think they’re going to look too far ahead. They know what’s at stake. You don’t have to remind them,” Bianco said with a chuckle.

Ole Miss, which was the last at-large team invited to the NCAA Tournament, remained undefeated in it.

Tim Elko hit an RBI single and Kemp Alderman a sacrifice fly in the third inning, and Garrett Wood added an RBI double in the fourth to put the Rebels ahead 3-0.

Then came the big sixth inning, when Ole Miss sent 11 batters to the plate — the first seven reached base — and scored seven times to extend its lead to 10-0. Elko and Kevin Graham hit back-to-back two-run doubles, while Jacob Gonzalez and Hayden Dunhurst had RBI singles.

Although the sixth inning was the turning point in the game, Bianco said the biggest moment came just before that.
Southern Miss had the bases loaded with two outs in the bottom of the fifth inning when Reece Ewing hit a long fly ball down the right field line that curled just foul. After a replay review confirmed the call, DeLucia struck out Ewing to escape the jam and keep it 3-0. The Rebels then blew it open in their next at-bat.

DeLucia (6-2) got two more outs in the bottom of the sixth before leaving the game. He allowed four hits and two walks, and had nine strikeouts in 5 2/3 innings.

“You’ll talk about the seven-spot. I thought the bigger thing was Dylan delivering the slider to Ewing right after that (foul ball),” Bianco said. “It’s one of the reasons he’s so good, is he’s able to do what the great ones do and make a pitch to get off the field. No bigger pitch today, maybe, than that.”

Southern Miss pitcher Hurston Waldrep (6-2) had 12 strikeouts in five-plus innings — he left after giving up a walk and a single to start the sixth — but struggled for much of his outing.

“We were fortunate. We put some really good at-bats together and made (Waldrep) work early. We ran some of the pitches up and it looked like he lost his rhythm a little bit,” Bianco said.

Southern Miss also missed some chances to score early in the game. It left two runners on in the second inning, stranded another at third in the fourth, and then couldn’t cash in its bases-loaded opportunity in the fifth.

After the Rebels blew it open in the sixth, the Golden Eagles only put one man on base in 3 1/3 innings against reliever Jack Dougherty. Dougherty earned his second save of the season with his extended outing. Ole Miss posted its first shutout of the year.

“The first four innings we had opportunities to punch back and get momentum when they were up 3-0. At least score one run and get back on the board,” Berry said. “When you miss on opportunities to get momentum, you actually just give more momentum to them and I feel like that’s exactly what happened.”

Now the Golden Eagles will have to punch back hard to keep one of the best seasons in the program’s history alive. They’ll have ace Tanner Hall — the Conference USA Pitcher of the Year — on the mound Sunday, and did not overwork their key bullpen arms when Game 1 got out of hand.

Southern Miss won three consecutive elimination games last weekend to win its regional in its home ballpark, and Berry was confident it could win two more to get to Omaha.

“We have the pitching to win this thing. The guys that need to hit and are supposed to hit, they need to hit and the other ones need to step up. We’ve got to have all hands on deck to be able to pull this thing off,” Berry said. “Certainly, I believe in this group. You don’t win 47 games and check a lot of the boxes we’ve checked during the course of this year, and get where we are without being a team that’s capable of doing this.”