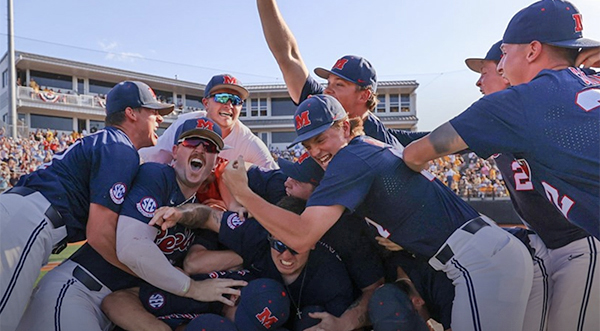 HATTIESBURG — Before the final out was even recorded Sunday, the signs were sprinkled around Pete Taylor Park sporting a simple slogan.

At long last, it wasn’t merely wishful thinking for the Ole Miss Rebels. It’s a reality.

Ole Miss continued its magical postseason run by beating Southern Miss 5-0 on Sunday to sweep the Hattiesburg super regional and advance to the College World Series for the first time since 2014.

“I’m speechless right now. I’m just so proud of this team,” said Ole Miss outfielder Justin Bench, who was 3-for-5 with one RBI and one run scored in Sunday’s clincher. “We were 7-14 and looking like we were out of it but we just stuck together. Senior leadership kept this team together. They kept everybody under their wing and we kept winning and got us to here.”

The Rebels were the top-ranked team in the country in March, then needed a late surge to earn the last at-large bid to the 64-team NCAA Tournament field. They’ve won 13 of 17 games in May and June and will head to the College World Series as perhaps the hottest team in the country.

“What makes this team special is the story you all know. This team was 7-14 and in a place that we’ve never been in 22 years. We’ve been to Omaha twice, but we’ve never been 7-14 in our league,” Ole Miss coach Mike Bianco said. “So many older guys didn’t let this team go, and we started playing at the end like we were capable. We started the season that way and now we’ve finished that way.”

The Rebels are averaging nine runs per game in the NCAA Tournament, but the story of the super regional was their pitching. They became only the third team since 1999 to post two shutouts in a super regional.

Hunter Elliott followed the Rebels’ 10-0 win in Game 1 by shackling Southern Miss (47-19) on Sunday. The true freshman left-hander had 10 strikeouts in 7 1/3 innings, did not walk a batter, and allowed three hits — all singles.

“(Elliott) hadn’t even broke out a razor year. True freshman and he’s way ahead of time. He had the mound presence of a senior. He was in total control,” Southern Miss coach Scott Berry said. “He really mixed his pitches. He plussed and minused the velocity and had a great change-up that made his fastball sneaky. He hit both sides of the plate and never gave us a chance to get any kind of timing off of him.”

A lack of timing at the plate plagued Southern Miss the entire weekend. It only had seven hits in the two games, struck out 21 times, and had few opportunities to even score.

Elliott retired 16 batters in a row, beginning with the final out of the second inning and ending when Slade Wilks led off the eighth with a single.

Elliott (4-2) got one more out before exiting the game. Southern Miss loaded the bases with two outs, but reliever Josh Mallitz got Carson Paetow to pop out to end the threat. Mallitz then retired the side in order in the ninth.

“The difference was, we never really created anything for ourselves. Both times we had somebody on third base it was with two outs,” Berry said.

Ole Miss did take advantage of its opportunities. Jacob Gonzalez hit an RBI single and scored on another single by Kevin Graham in the fifth inning. In between, Bench scored on a passed ball to give the Rebels a 3-0 lead.

Bench added an RBI single in the sixth and T.J. McCants a solo homer in the eighth to finish the scoring.
Southern Miss starter Tanner Hall, the Conference USA Pitcher of the Tear, had six strikeouts but gave up four runs in 5 1/3 innings. He allowed eight hits.

“I thought, like last night, we made Hall really work,” Bianco said. “We were able to get the pitch count up and got a couple of balls that found holes and were able to push a couple of runs across. Fortunately, with the way we pitched, that’s all we needed.”

Ole Miss’ victory ended years of frustration and near-misses for the program. Bianco has gotten his team to the super regional eight times in his 22 years in Oxford, but lost in six of those trips. Three times, the Rebels suffered defeat after winning the opening game of the best-of-three series. They’d lost in the super regional in 2019 and 2021, as well.

Finally, Bianco and the Rebels found the winning formula to punch through to the College World Series. They’ll open the CWS either next friday or Saturday against the winner of the super regional between Auburn and Oregon State.

Arkansas, Notre Dame, Texas A&M and Oklahoma have also advanced to the CWS.

“The question was asked a lot, ‘What does it take?’” Bianco said. “I guess the answer is, ‘Don’t let the other team score in a super regional and you’ve got a shot to win.’”