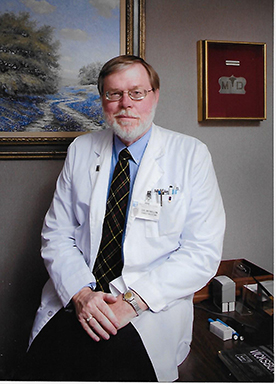 UPDATE June 15: Thursday’s dedication ceremonies for the Lamar McMillin Civil War Library by the Friends of the Vicksburg National Military Park and Campaign have been postponed because of illness, Bess Averett, executive director of Friends of VNMP and Campaign said.

The ceremonies were to be held at the Friends’ office, 2414 Grove St., formerly the Anshe Chesed Temple. Averett said the ceremonies will be rescheduled at a later date.

Longtime Vicksburg physician, preservationist and historian Dr. Fitten Lamar McMillin will be honored by the Friends of the Vicksburg National Military Park and Campaign on Thursday at 5 p.m. with the dedication of the Lamar McMillin Civil War Library at the Friends’ office, 2414 Grove St., formerly the Anshe Chesed Temple.

The public is invited and a reception will follow.

McMillin died in December 2018. After practicing medicine in Vicksburg for 35 years, he retired and became a licensed battlefield guide for the Vicksburg National Military Park. Throughout his life, his love of history drove his collection of more than 2,000 Civil War books, reference manuals and maps.

In 2020, his wife Carol McMillin began cataloging the extensive collection and ultimately transferred the library to the Friends of Vicksburg National Military Park and Campaign.

“The generosity of the McMillin family has made it possible for this extensive library to be used for generations to come. Licensed battlefield guides, park rangers and other researchers will have the opportunity to utilize this vast collection,” said Bess Averett, executive director of Friends of VNMP and Campaign. “Dr. McMillin was a true preservationist and historian, and his passion lives on through this amazing donation.”

McMillin was a sustaining member of Friends of Vicksburg National Military Park and Campaign since its inception in 2008. In addition to his work with VNMP, he and his wife lovingly restored the historic properties the Mary Harwood House and Catherine’s Palace.

The former Fleckstein-Coccaro grocery at 1501 Martin Luther King Blvd., was built in 1839 by Christian Fleckstein who came to Vicksburg from Bavaria and was known as Catherine’s Palace, for Catherine Coccaro, who lived in the home.

Friday program to focus on importance of Vicksburg’s fathers