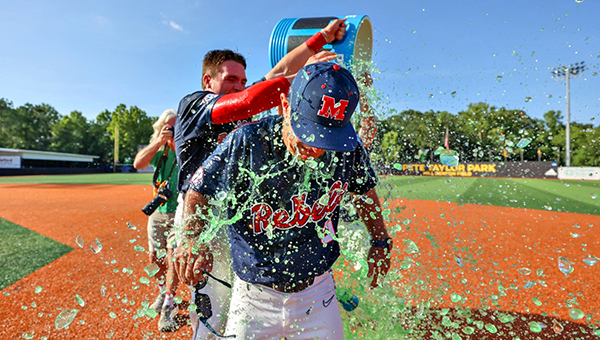 A famous, long-running joke among Mississippi’s college baseball fans is that Omaha stands for “Ole Miss At Home Again.”

Not this year. Omaha is no longer a punch line or an elusive goal for the Rebels. It’s now a reality, the place they’re headed for only the second time this century.

Ole Miss swept Southern Miss in their super regional series in Hattiesburg last weekend to end years of frustration and clinch a berth in the College World Series. It’s Ole Miss’ first trip to Omaha since 2014, and only the second in Mike Bianco’s 21 seasons as head coach.

“It’s about them. It’s never been about me. I’ve been here a long time and we’ve had a lot of success. Yeah, we haven’t gotten to Omaha as much as we want — probably not as much as the fans would want — but we’ve won a lot of baseball games,” Bianco said after Sunday’s series-clinching 5-0 win over Southern Miss. “We’ve had a lot of great kids that were in the other dugout, and that’s tough. That’s a tough day. So I’m just excited about this group.”

Of all the groups Bianco has had, this one might have had the wildest run to success.

Ole Miss started the season by winning 16 of its first 20 games and ascending to a No. 1 national ranking in mid-March. Then it was swept at home by Tennessee and things quickly went sideways. The Rebels went 8-15 in their next 23 games.

“There was never a time where I felt they didn’t think they could win,” Bianco said. “Through the tough times, even if we had given up a lead or whatever it was, I don’t remember looking in our dugout and going, ‘Man, I don’t know if we can win.’”

The Rebels finally turned things around when the calendar turned to May. They swept Missouri and LSU, and picked up a midweek road win at Southern Miss. The late winning streak pushed the Rebels into the NCAA Tournament as the last at-large team to get a bid.

Ole Miss essentially won a coin flip over North Carolina State among the selection committee, then made the most of its opportunity. It swept through the Coral Gables Regional by beating Arizona twice and No. 6 national seed Miami once. After that, it easily defeated No. 11 national seed Southern Miss in two games in Hattiesburg, 10-0 and 5-0.

“I’m speechless right now. I’m just so proud of this team,” senior utility player Justin Bench said. “We were 7-14 (in the SEC) and looking like we were out of it but we just stuck together. Senior leadership kept this team together. They kept everybody under their wing and we kept winning and got us to here.”

Ole Miss has used a couple of different methods to fuel its postseason run. It is averaging nine runs per game in the NCAA Tournament — it scored 22 in a regional-clinching win over Arizona — but has also gotten a string of exceptional pitching performances.

Ole Miss pitchers have allowed one run or less in three of the team’s five NCAA Tournament games. The Rebels are only the third team since 1999 — along with Rice in 2002 and Texas Tech in 2014 — to sweep a super regional series with two shutouts.

Dylan DeLucia had nine strikeouts in 5 2/3 innings in the 10-0 win in Game 1. Hunter Elliott had 10 in 7 1/3 innings in Game 2. The two starters, along with relievers Jack Dougherty and Josh Mallitz, allowed a total of seven hits and three walks in 18 innings in the series.

“I just think sometimes you’ve just got to tip your hat,” Southern Miss coach Scott Berry said. “There’s a lot of times people have tipped their hat to our pitchers this year. Today I have to be that opposing coach that goes, ‘You know what? Those are two pretty good arms that pitched.’ They weren’t power arms. They pitched and they got us out.”

And, finally, Ole Miss got out of the super regional round and on to the College World Series. It will play Auburn in its opener Saturday night in Omaha. Ole Miss won two out of three games against Auburn in March in the first SEC series for both teams. Ironically, the series win was one of the deciding factors cited by the NCAA Tournament selection committee in giving Ole Miss the final at-large bid over North Carolina State.

Ole Miss (37-22) has been to the NCAA Tournament 18 times during Bianco’s tenure, and the super regional round eight times. Six of those super regional trips ended in defeat, often in agonizing ways.

Ole Miss lost three super regionals — all at home — after winning Game 1 of the best-of-three series. It lost in three games to Arkansas in 2019 and Arizona in 2021, both times with Game 3 blowouts. Bianco joked after Sunday’s win that he finally figured out a winning formula.

“The question was asked a lot, ‘What does it take?’ I guess the answer is, ‘Don’t let the other team score in a super regional and you’ve got a shot to win,’” Bianco said with a laugh.