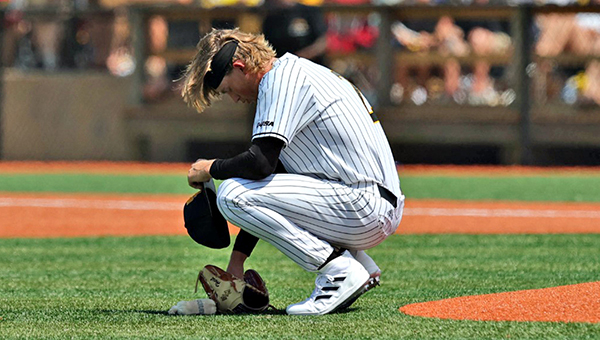 Southern Miss pitcher Hurston Waldrep prepares to pitch in Game 1 of the team's super regional series against Ole Miss. Southern Miss was swept in the series last weekend, ending one of the best seasons in the program's history.

“I told (Ole Miss coach Mike Bianco) after the game, if it couldn’t have been us I wanted it to be you,” Berry said.

It wasn’t that Berry lacked those emotions. It was just that he was able to appreciate the totality of the Golden Eagles’ journey in 2022 rather than focusing on the end of it.

Southern Miss finished with a 47-19 record, which tied for the second-highest win total in the program’s history. It earned the No. 11 national seed in the NCAA Tournament, advanced to a super regional for the second time and hosted one for the first time.

There was too much that went right for the Golden Eagles, Berry said, to dwell on one weekend where everything seemed to go wrong.

“The journey started back in February, actually in August, but you know, the book really started getting hot in February. And that’s what I told them today before the game, ‘We’re the author of the book, we decide when it ends,’” he said. “Unfortunately, today, it ended, but within that book there’s a lot of great stories in there.”

Stories like senior outfielder Gabe Montenegro, who over five seasons played in 260 games and totaled 1,020 at-bats for a total that ranked in the top 15 all-time in Division I. Or sophomore Tanner Hall, who went from midweek starter to the Conference USA Pitcher of the Year this season.

Or the Golden Eagles’ remarkable ride as a whole. They set a school record with a 15-game winning streak in April and cruised to the Conference USA regular-season championship.

In the postseason, the Golden Eagles won three elimination games — including two against college baseball blue blood LSU — to advance to a super regional for the first time since 2009.

Getting to a super regional, Berry said, was a nice way to build off a run to the Oxford Regional title game in 2021.

“Every year is a learning experience that moves you forward to the next one and makes you better. You can learn a lot more from failing than you can winning if you know how to go about it,” Berry said.

This season ended at the hands of a red-hot Ole Miss team that has suddenly become their postseason nemesis. Ole Miss (37-22) swept Southern Miss in the super regional, 10-0 and 5-0, to eliminate the Golden Eagles from the NCAA Tournament for the second year in a row.

Ole Miss pitchers allowed a total of seven hits and three walks in 18 innings in the series. Southern Miss’ batters struck out 21 times.

“It was just a timing problem. They just kept us off time and did a good job of plussing and minus,” Berry said. “Last weekend we swung the bat pretty well and scored runs. I just think sometimes you’ve just got to tip your hat. There’s a lot of times people have tipped their hat to our pitchers this year. Today I have to be that opposing coach that goes, ‘You know what? Those are two pretty good arms that pitched.’ They weren’t power arms. They pitched and they got us out.”

Southern Miss will move from Conference USA to the Sun Belt Conference in 2023, but has no intentions of giving up the momentum that carried it to such great success in its old league.

Only three seniors — Montenegro, starting pitcher Hunter Riggins and reliever Drew Boyd — are on this year’s roster. A number of key players are only sophomores and could have two more seasons left if they don’t turn pro or transfer.

Perhaps that’s why Berry took the super regional loss in stride. He was already dreaming of the potential for next season.

“We’ll be called a COVID team, basically, because of the extra year,” Berry said, referring to the NCAA’s rule that gave a number of players an extra year of eligibility following the 2020 COVID-shortened season. “We’re excited about those guys coming back. It’s time to take that next step to Omaha next year.”