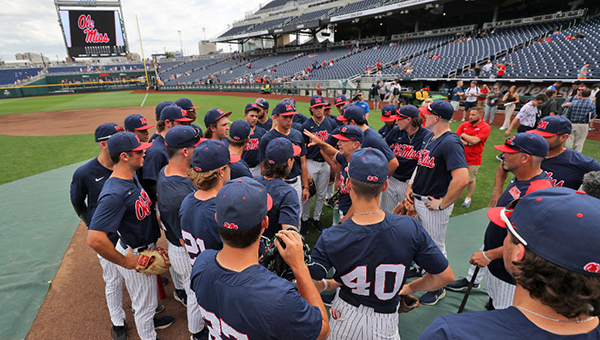 Bracket 2 is a different kind of family feud.

SEC West teams Ole Miss, Auburn and Arkansas will join Stanford in a battle royale leading to a spot in the championship series. Arkansas and Stanford play each other Saturday afternoon, and then Ole Miss (37-22) and Auburn (42-20) square off Saturday at 6 p.m. in Omaha.

The matchups will provide a comfort level for the Southeastern Conference teams, but also a challenge considering how much they’ve evolved since the last time they faced each other, Ole Miss coach Mike Bianco said.

“We’re all a little bit different, so it’s going to come down to like it always does and should is who plays the best,” Bianco said Thursday, when the teams gathered at Charles Schwab Field in Omaha for open practices and press conferences. “I think there’s too much made up of the scouting reports and all of that. It comes down to which guys pitch better, which guys get the timely hit. That’s usually who wins.”

The pitching matchup for the Ole Miss-Auburn game speaks to how much teams can change over the course of a season. When the Rebels and Tigers met in the first SEC series of the season in mid-March, Dylan DeLucia and Joseph Gonzalez were not major players for their teams.

DeLucia pitched 3 1/3 innings of relief and earned the win in a 13-6 Ole Miss victory in the opener. Gonzalez was injured and did not play at all for Auburn. On Saturday night, they’ll both get the ball as their respective teams’ aces.

“Did DeLucia pitch against us? Three innings out of the pen. And he did an amazing job how he hooked it up for Ole Miss in the stretch run,” Auburn coach Butch Thompson said. “That pitching matchup with these two guys that didn’t really play this role the first time around, that’s another piece to the intrigue, I guess.”

DeLucia did not move into Ole Miss’ weekend pitching rotation until the beginning of April, then quickly entrenched himself as the Friday night starter.

The junior right-hander is 6-2 with a 4.35 ERA and 88 strikeouts in 10 starts and 19 overall appearances. He had 12 strikeouts in six innings in a 7-4 win over Arizona in the Coral Gables Regional, and pitched 5 2/3 shutout innings in a 10-0 victory over Southern Miss in the super regional round last weekend.

Along with freshman Hunter Elliott, who has allowed one run in two starts in the NCAA Tournament, DeLucia has been a key part of a pitching staff that propelled the Rebels to five consecutive wins in the postseason.

DeLucia said he’s gotten more comfortable over the course of the season, but added his teammates have made his job easier by offering plenty of run support. The Rebels scored 17 runs in his two starts in the NCAA Tournament.

“They’re going to put runs up. I just have to put as many zeros up as I can. That’s just going to help them out,” DeLucia said. “But it also helps when, like, last week we were up 10-0 and I’m still on the mound. Just gives me more comfort on the mound. Allows me to throw the ball in the zone and let them hit it.”

Gonzalez, a sophomore right-hander, has also worked his way up in Auburn’s rotation. His first SEC start was not until April 2 against LSU, but he went seven-plus innings in each of his next four outings — including a complete game victory over Vanderbilt on April 10 that earned him the SEC Pitcher of the Week award.

“He’s kind of been throwing in the third slot. And as we worked through, we got him to the two-slot. And we eventually got to the one-slot because he missed some time early in the year,” Thompson said. “Arguably, at the end of the day, he’s probably our best starter. Has gone the longest per start. And we’re excited to let Joseph get an opportunity to start us off here.”

Ole Miss won two out of three games against Auburn in March, then took a long and winding road to meet the Tigers again in Omaha.

The Rebels were 16-18 in their last 34 regular-season games, lost in the first round of the SEC Tournament and sneaked into the NCAA Tournament as the last at-large team. They’ve ripped off five wins in a row since then, however, and are one of the hottest teams in the College World Series field.

That difficult path, as well as their checkered postseason history, has led the Rebels to appreciate this trip to Omaha. The Rebels lost super regionals in 2019 and 2021, and in regionals in 2015, 2016 and 2018.

Senior first baseman Tim Elko, who has been Ole Miss’ captain for the past three years, said he took a moment during Thursday’s practice session at Charles Schwab Field to soak in the atmosphere.

“It was an amazing moment. I’ve always dreamed of playing in Omaha. And I finally got here my last year,” Elko said. “But just a really cool moment, being out there with all the guys and taking ground balls and just taking it all in. Really cool.”