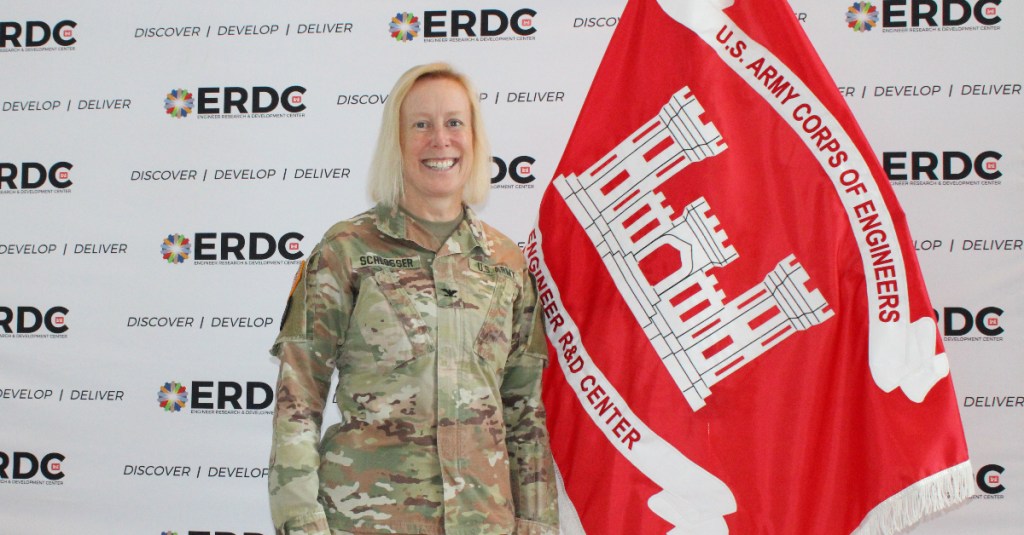 Col. Teresa Schlosser is retiring July 16 after a 27-year career in the U.S. Army, the last three as commander of the U.S. Army Engineer Research and Development Center. (Photo by John Surratt | The Vicksburg Post)

When Teresa Schlosser was a student at the University of Montana, she made a life-changing decision.

“One of the girls on my dorm floor wanted to join ROTC but didn’t want to go by herself; I went with her,” Schlosser said. Once she became immersed in the program, she discovered she enjoyed it and stayed in.

On July 14, Col. Teresa Schlosser will hand over command of the U.S. Army Engineering Research and Development Center to her successor, Col. Christian Patterson, and retire, closing a 27-year career in the Army that has taken her around the world and allowed her to command one of the top advanced research centers in the world.

Commanding ERDC, Schlosser said, has been an adventure, “Especially during a pandemic.”

“ERDC is always an adventure; I call it the Corps of Engineers’ unicorn because it’s this strange mythical beast that everyone wants to play with but nobody knows — we don’t know — everything we do here. There’s always something different happening here.”

The COVID-19 pandemic, Schlosser said, was the biggest challenge of her command.

“Sending everybody home with three hours’ notice and assuming they were going to be back in two weeks, and it was two years, really, before we got back to normal,” she said.

“All of a sudden we were all working virtually and we weren’t prepared for that; people didn’t have their virtual provider network — a secure network so people can connect with the Corps of Engineers network securely,” she said. “Suddenly everyone was apart, so one of my biggest jobs was to try to keep people as informed as I could, especially at the start of the pandemic and then keep people feeling connected back to ERDC. When it first started I was sending out an email every day to all the employees across ERDC. Now I’m down to once a week.”

When she took command of ERDC in September 2019, Schlosser already had a connection with the center.

“When I was a captain, I was doing disaster response in the Philippines and Thailand  — a typhoon and the Indonesia tsunami,” she said. “I took my team out to the locations and I would call back to ERDC to ask for help.

“My interaction with ERDC started when I was just a young captain trying to figure out some complex engineering issues in the disaster zone,” she said. “As I came up through the ranks, ERDC was always a reach-back; knowing they were available. When I learned I got the command, I was excited. I was actually proud to become a part of that.”

She also shared a connection with two of her predecessors, Col. Ivan Beckman and Col. Bryan Green — all three served in South Korea.

Looking to her retirement, Schlosser said she will miss the people she has worked with.

“My favorite part about the Army has been helping people and having something different all the time,” she said. “None of my days are the same. I’ve had a 27-year career and this job will be the longest job I’ve ever had and it’s three years.

“I’ve never had the same job twice; I’ve never stayed more than three years,” she added. “I’ve lived and served around the world, but I’ve had one career so that’s been pretty cool.”

She is looking forward to being able to travel with her husband “and to spend as much time as we want, because with the Army it’s always been where we’re going next.

“At this point, we can spend as much time; there’s no time schedule,” she said. “Now we have time and we talk about it. We can do what we want to do.”

Presently, she said, she and her husband will remain in Vicksburg.

“Our house is fixed up, we’ve got great neighbors, great friends in the community; we’re not that far from an airport. We’re going to stay here for a bit.”

VICKSBURG FACTS: Vicksburg is a popular word for famous…