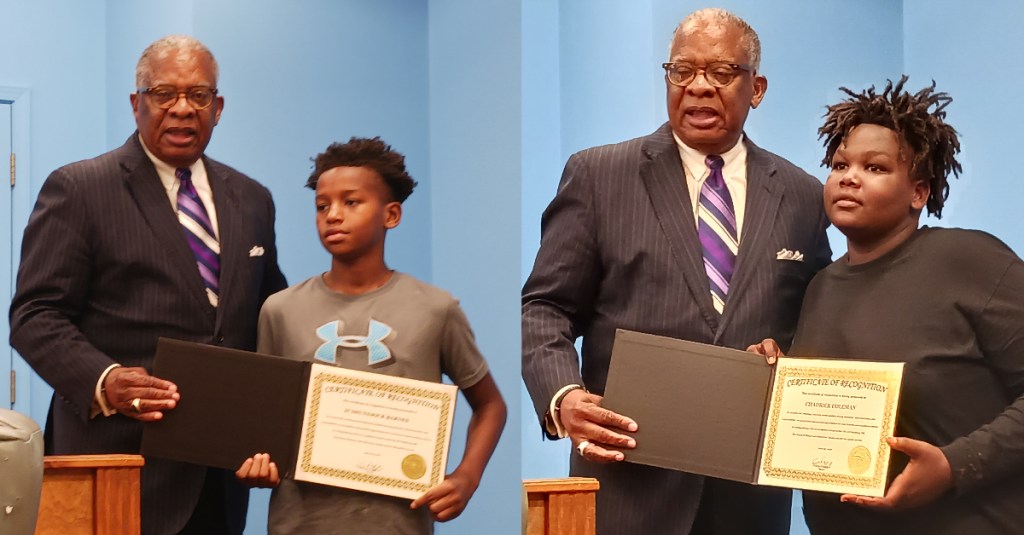 D’Shundrick Barnes and Chadrick Coleman were honored Monday by the Board of Mayor and Aldermen for their efforts in preventing a fire at a home in Marcus Bottom recently.

“We have two heroes in our community,” Mayor George Flaggs Jr. said, describing how Barnes, 12, and Coleman, 13, while walking home from playing basketball noticed smoke coming from a woman’s house and reacted quickly to prevent food burning on her stove from spreading.

The boys, who are first cousins, likely saved the resident’s life.

“It’s a great feeling,” Coleman’s mother, Jamila Barnes, said of seeing her son honored. “He really made me proud.”

“It was a great feeling; I’m proud,” D’Shundrick Barnes’ mother, Jalila Barnes said. “He’s always talking about being a firefighter and helping people.”

According to information from the mayor’s office, Barnes and Coleman smelled the smoke coming from a window of the house, saw an open screen and managed to get inside the house, where they located the kitchen and saw a pot burning on the stove.

Barnes put water inside the pot to extinguish the fire and Coleman turned off the stove. The boys then went outside and waited for the Vicksburg Fire Department to arrive.