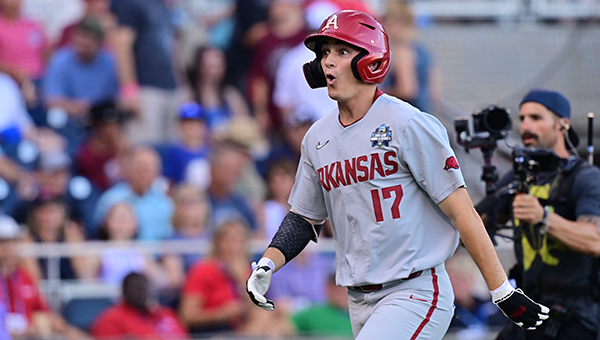 OMAHA, Neb. (AP) — Brady Slavens’ home run to the deepest part of the park gave Arkansas the lead and the Razorbacks held on for a 3-2 win in the College World Series on Wednesday night after Ole Miss’ ninth-inning rally came up just short.

The Hogs (46-20) forced a second bracket final against Ole Miss (39-23) Thursday at 3 p.m., with the winner advancing to play Oklahoma in the best-of-three championship round starting Saturday. Thursday’s game will be televised on ESPN2.

For eight innings, Arkansas all but shut down an offense that had produced 64 runs in its first seven NCAA Tournament games. Kemp Alderman, who hit a tying homer in the second inning, was the only Ole Miss runner to advance past first base to that point.

Then the Rebels loaded the bases with no outs in the ninth after closer Brady Tygart hit two straight batters and Alderman singled.

Zack Morris, who had given up two runs in two-thirds of an inning in the Hogs’ 13-5 loss to Ole Miss on Monday, came on and struck out pinch-hitter Hayden Leatherwood and got T.J. McCants and Jacob Gonzalez to fly out to end the game. In between the flyouts, Justin Bench hit an infield single that brought in a run and cut the Rebels’ deficit to 3-2.

With the game tied at 1 in the fifth, Slavens blasted John Gaddis’ second pitch 436 feet to straightaway center into a light breeze. The only other players to homer to dead center since the CWS moved to Charles Schwab Field in 2011 were Florida’s Pete Alonso (2015) and Florida State’s Dylan Busby (2017).

The Hogs added a huge insurance run in the eighth. Cayden Wallace sent a ball down the left-field line for a double, getting his hand onto the bag just ahead of second baseman Peyton Chatagnier’s tag attempt. The call was upheld on video review.

Michael Turner followed with a base hit that brought Wallace home. The Hogs had the bases loaded after the Rebels intentionally walked Slavens with first open, but Jack Dougherty struck out Slavens and pinch-hitter Kendall Diggs to end the inning.

Freshman lefty Hagen Smith (7-2) pitched five innings for his longest outing since he went six in an April 30 win over the Rebels. He allowed one run on two hits and four walks, and he struck out eight.