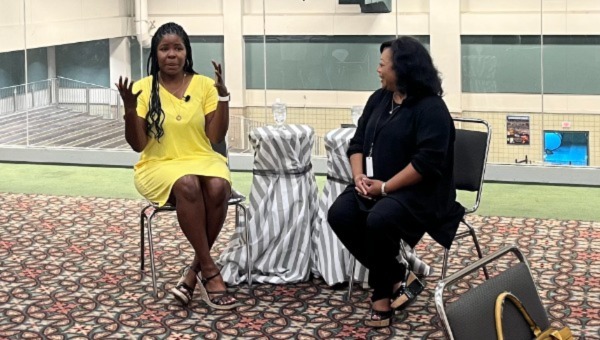 Melissa Faith Payne and Maggie Wade, both news anchors for WLBT, served as guest speakers for the June series of the Vicksburg Convention Center's Taste of Vicksburg. Payne, seated on the left, was Miss Vicksburg in 1998. Catherine Hadaway/The Vicksburg Post

As part of the Taste of Vicksburg series, the Vicksburg Convention Center welcomed WLBT news anchors Payne and Maggie Wade back to the River City to give residents a sneak peek into the world of Miss Mississippi through the two broadcast journalists’ eyes. The event, held on June 17, served as a kick-off to Pageant Week.

VCC Executive Director Erin Southard welcomed attendees to the monthly event, which is in celebration of the convention center’s 25th anniversary in Vicksburg.

“Melissa Faith Payne, our very own Vicksburg girl… not only is a broadcaster but even competed in Miss Mississippi the first year it was hosted right here in our building,” Southard said. “So on our 25th Anniversary, we couldn’t think of having it any other way than having two wonderful ladies come to share a little bit about their life in broadcasting, with Maggie being the trailblazer and Melissa being able to reap those benefits.”

Payne and Wade welcomed the Miss Mississippi Competition back to Vicksburg, spoke of broadcasting challenges and told a few personal stories as a way to kick off the arrival of this year’s 31 candidates, sponsors, families and fans celebrating Miss Mississippi this week.

“You know Miss Mississippi is a journey for a lot of young ladies,” Payne said, speaking of her experience of earning the title of Miss Vicksburg and then going on to compete for the job of Miss Mississippi. “It’s like a lifelong journey. My journey really started a month or two before the Pageant, when I decided I wanted to do it, and (my mom) said ‘There’s no way.’ And I said, ‘Yeah, I think I can do it.’ I just grabbed my ballet shoes and grabbed a dress and said ‘We’ll make it happen.’ And we did.”

“I got a chance to help (2021 Miss Mississippi Holly Brand) with her mock interview and the preparation that goes into it,” Payne said. “It is amazing — I had to prepare myself to have the questions to know to ask her about abortion, about gun control, about elections, about voting laws and voting rights. Those are things that I had to make sure I need the right answers to and how to phrase those questions. They dabble in just about everything and they represent our state so well.

“More often than not, (Mississippi) oftentimes doesn’t have a good reputation,” Payne said. “People look at Mississippi, and they aren’t expecting the best but we oftentimes have the best and brightest that we send to Miss America.”

The two shared laughs over one year in particular, when Wade had a scheduled vacation and Payne covered the Pageant on her own.

“One year, Maggie wasn’t able to do it and I had to cover it and I was like ‘Please, Maggie, don’t you ever go on vacation,'” Payne said with a smile.

“She did a great job,” Maggie replied, speaking to Payne. “You have an interesting perspective and I’ll ask you, what was it like competing?”

“Being on the Miss Mississippi stage in your hometown was amazing,” Payne said. “It was not too long after I won Miss Vicksburg, I will never forget I was at the grocery store and a young lady came up and said, ‘You’re Miss Vicksburg. Can I have your autograph?’

“It was the first time anybody had ever asked for my autograph,” Payne continued. “I will never forget that.”

Payne’s platform as Miss Vicksburg was Family Unity Night: FUN. The platform focused on bringing families together and having fun together on a regular basis.

“It’s something I continue with now,” she said. “I have four boys at home. We don’t have family unity night because every night is family unity night. I really focus on making sure that we spend quality time together.

Payne said actually participating in the competition gives her perspective when covering the event as a professional broadcaster.

“Having a chance to be on that end of it and then to flip and cover it, is just so amazing because I know how the girls feel when they are backstage,” Payne said. “I know how they feel when they are preparing to come out on stage… (Knowing) what it was like to prepare for it kind of gives you a unique perspective when you are covering it.”

The next event in the Taste of Vicksburg series will be a concert by Eleana Davis Reel and Dr. Clarissa Behr on July 29 at noon. Tickets are $15 and can be purchased at the Vicksburg Convention Center box office or by calling 601-630-2929.