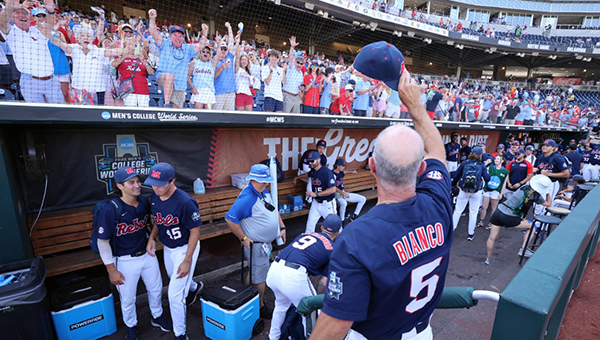 OMAHA, Neb. (AP) — Less than a month ago, Ole Miss players and coaches didn’t know if they would make the NCAA baseball tournament.

This weekend, the Rebels will play for the national championship.

Next up is Oklahoma in the College World Series finals. The Sooners also had doubts about whether they would make the 64-team field until they got hot in the second half of the season and won the Big 12 Tournament for the conference’s automatic bid.

The best-of-three finals begin Saturday night at Charles Schwab Field, and all 16 national seeds will watch from home. An unseeded team will leave Omaha with the championship for the first time since Coastal Carolina in 2016.

“We’ve always thought we were this good,” Ole Miss pitcher Hunter Elliott said Friday. “I think at one point we were ranked No. 1. But like in baseball, sometimes you scuffle, and we were scuffling there for a while, but we just continued to believe and knew we were good enough, and we ended up here.”

Ole Miss (40-23) and Oklahoma, as No. 2 regional seeds, both had to go on the road for regionals and super regionals. Oklahoma (45-22) went 3-0 in CWS bracket play to make the finals; Ole Miss went 3-1 and had to beat Arkansas in a second bracket final on Thursday.

“In a lot of ways they’re similar to us,” OU center fielder Tanner Tredaway said. “They do a lot of small things well. They’ve got power in the lineup. They’re a really good ballclub. They’ve been playing with a chip on their shoulder just like we have. They were in question for a regional, and they’re here to make a statement just like we are.”

Ole Miss’ pitching staff entered the tournament with a 4.68 ERA but 11th nationally at 10.7 strikeouts per nine innings. The Rebels have been dominant on the mound the entire tournament, posting back-to-back shutouts in their super-regional sweep at Southern Miss and allowing seven earned runs in 36 innings (1.75 ERA) while striking out 38 in Omaha.

No one has been better than Dylan DeLucia, who tossed a four-hitter in a 2-0 win over Arkansas on Thursday. He has surrendered just one earned run in 16 2/3 CWS innings, although after throwing 113 pitches in a complete game against the Razorbacks he’s unlikely to see the mound again unless the finals go to a deciding Game 3.

Calvin Harris, Kevin Graham, Justin Bench and Kemp Alderman have provided most of the offense, combining to bat .397 (25-of-63) and drive in 15 runs. Tim Elko, who came to Omaha with 22 homers, hit a three-run shot in a 13-5 win over Arkansas but otherwise has been mostly quiet.

Reflecting on May 27, the day NCAA Tournament field was announced, Bianco said there was an uncomfortable feeling in the room where the team was watching the selection show. The Rebels received the last at-large bid over North Carolina State, changing the mood to one of joy.

“We weren’t the 64th team. I try to say that,” Bianco said. “We were a good baseball team, and I think everybody would vouch for that.

“There are 31 automatic bids and 33 at-large bids. Now, were we the 33rd at-large bid? Maybe. We felt sitting in that room we deserved to get in. You just don’t ever know. We’re really glad they let us in.”

As they were in the regular season, the Sooners have been led offensively by Tredaway and Peyton Graham at the CWS. Tredaway is batting .500 (7-of-14) and Graham .545 (6-of-11). Jimmy Crooks has hit two homers.

The Sooners have used only four pitchers, and they’ve combined to allow 11 earned runs in 27 innings (3.67).

Chazz Martinez, Carter Campbell, Carson Atwood and Ben Abram, all of whom have made at least 20 appearances, haven’t been in game situations for two weeks.

“They’re not going to lose any rhythm,” Oklahoma coach Skip Johnson said. “They’ve been in their own bullpens. Every time we practice we throw bullpens. It’s different. We’ve got to go through a process of trying to make the bullpen game-like.”

Oklahoma will start Jake Bennett (10-3) on Saturday and Cade Horton (5-2) on Sunday. Johnson said he didn’t know who would start the if-necessary game on Monday.

Ole Miss coach Mike Bianco said he and his staff hadn’t determined a pitching plan as of Friday. Elliott would be next up in the rotation, but pitched 6 1/3 innings and threw 100 pitches Monday in a 13-5 win over Arkansas and could be held for Game 2 on Sunday. Derek Diamond has started 14 games this season, but has not pitched since June 6.

“Certainly Hunter is going to either pitch Saturday or Sunday. We’ll just get to practice (Friday), let him stretch, let him throw a little bit, and we certainly want to make sure that he’s ready and capable, and on normal rest,” Bianco said. “That’s not going to be the case this weekend, so we need to know when is his best shot to give us the best opportunity to win a baseball game, so we’ll wait.”