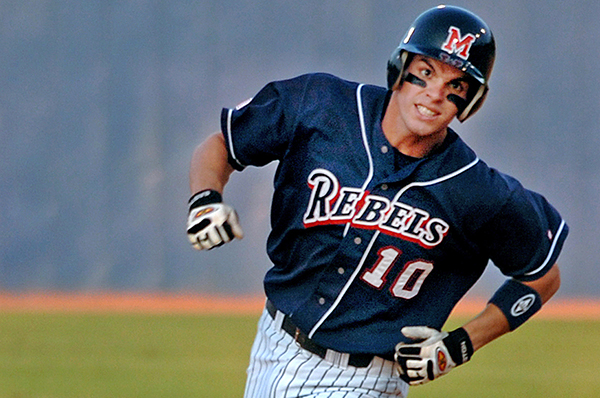 On Saturday night, Justin Henry’s attention will be sharply divided for a few hours.

On the stage at the Vicksburg Convention Center, two of his daughters will participate in the Miss Mississippi Competition as Belles. About 800 miles away, in Omaha, Neb., something else he helped give birth to will enjoy a moment in the spotlight as well.

Henry, a Vicksburg native and resident, played baseball at Ole Miss from 2004 to 2007. He and his teammates — who included his younger brother Jordan and former Warren Central star Brian Pettway — played in three consecutive NCAA Tournament super regionals and turned the program into a national power. Now, with the 2022 Rebels playing in the College World Series finals, Henry is feeling a sense of pride and joy for his successors.

Ole Miss (40-23) will play Oklahoma (45-22) in the best-of-three CWS championship series beginning Saturday at 6 p.m. The final night of the Miss Mississippi Competition starts at 8 p.m.

“There is definitely a sense of pride about it. Especially since (head coach Mike) Bianco is still there. That helps. He and (assistant coach Carl) Lafferty, his first year was when I was there. To have that kind of continuity, you know those guys well having played for them,” Henry said. “You want it for them, you want it for the team, but just having those guys still there makes it even moreso a sense of pride and a sense of wanting them to succeed.”

Henry was one of the best players in Ole Miss history. He ranks seventh on the school’s career batting average list, at .359, and holds both the single-season (8) and career (14) records for triples. He’s in the top 10 in several other categories as well.

The Ole Miss teams of his era, unfortunately, were known for getting close to the College World Series before having their hopes cruelly dashed. The Rebels won the first game of their super regional at home in 2005 and 2006 before losing the next two. In 2007 they were swept at Arizona State.

Ole Miss played in four other super regionals since then, but its only trips to to the College World Series came in 2014 and 2022.

“We knocked on the door a lot over the years,” Henry said. “It’s just good to see them finally break through and make this run. It’s been a fun team to follow, for sure.”

Ole Miss’ pattern of super regional losses has led to criticism of Bianco over the years. Henry believes it’s unfair. Before Bianco was hired in 2001, Ole Miss had two NCAA Tournament appearances in 24 years. In the 22 seasons since then, it has 18 appearances.

Henry turned pro after the 2007 season. He played eight seasons in the minor league organizations of the Detroit Tigers and Boston Red Sox, retired in 2014, and now works as a scout for the Tigers. His job keeps him in touch with Bianco and Lafferty, and he has a tremendous respect for their accomplishments.

“People within the game know how good (Bianco) is at what he does. To build the program he’s built there, from what it was before to now being right there at the top with a lot of other elite schools, he’s done an unbelievable job,” Henry said. “Everybody wishes we could have gone to Omaha more often, but we’re always right there. He’s as consistent as anyone with his teams. I’m very happy for him to see him have this success and quiet some of the doubters.”

This year’s Ole Miss team has had a remarkable run that is well documented. Its record was 24-19 overall, and 7-14 in the SEC, after a 4-3 road loss at Arkansas on May 1. The Rebels have won 16 of 20 games since then — including two this week against Arkansas in the CWS — to reach the finals for the first time.

As a fan of his alma mater, Henry said it’s been a memorable ride.

“It’s been fun. Any time your team makes a run like this it’s an exciting time, and especially this year when there was a pretty rough stretch for them,” he said. “I’m impressed with how the coaches and the team stuck together. They got hot at the right time and that’s a lot of what you need in baseball. It’s not always who the best team is, it’s the team that’s playing the best at the right time.”

And as a fan, he’ll be keeping one eye on Saturday night’s game against Oklahoma. The other, though, will be on his other favorite team — Team Henry — as they do their thing in the Miss Mississippi Competition.

“It’ll be fun. I’m excited to be here and see my girls,” Henry said. “I’ll definitely be checking in every so often to see what’s going on (with Ole Miss). It won’t be the first time I’ve had to do that in my life.”