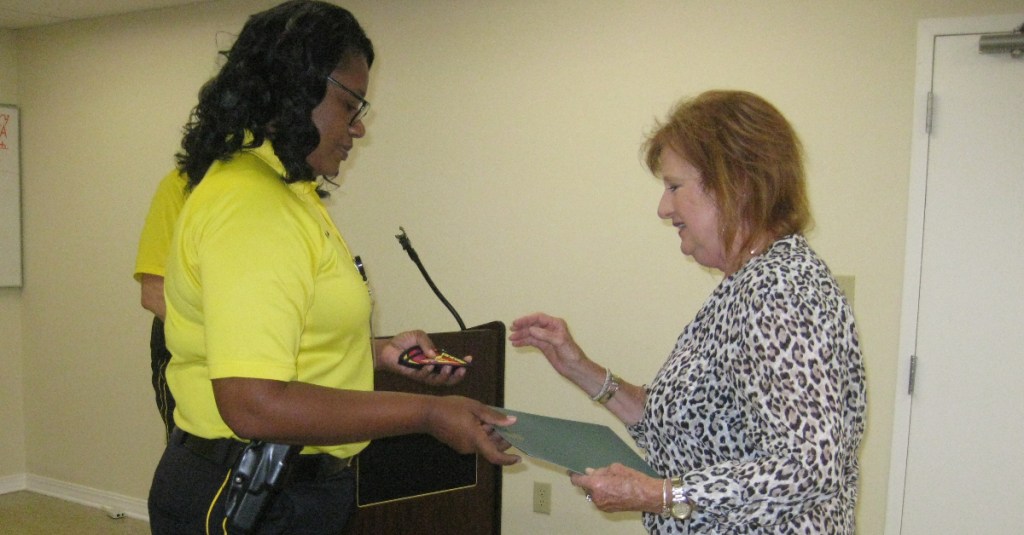 In April, a group of 12 Vicksburg residents met at the police department to participate in a unique program with law enforcement.

The dozen residents who sat in the municipal courtroom on Veto Street were the inaugural class of the Vicksburg Police Department’s Citizens on Patrol Academy, a program designed to give local residents a look inside law enforcement and help them better understand how the department operates.

According to the program’s course manual, the academy’s goal was to educate residents about the department’s structure and activities and provide a series of classes to give the residents a behind-the-scenes look at the department.

On Tuesday night, the group gathered one more time to meet with Police Chief Penny Jones and her staff, enjoy a meal and receive certificates and a Vicksburg Police Department shoulder patch.

“You people are the ones who are helping us make this a reality; helping us to see what we need to do and what we don’t need to do. You’re the pilot program,” Deputy Chief Mike Bryant said.

“It’s been a real privilege spending time with you and giving you a glimpse of how we do things; just pulling back the curtain a little bit and letting you see why we do what we do and why we think the way we think,” he added. “Thank you very much.”

“So many people wanted to be in this class this time, but we chose you all so I feel like you were some of the special people in the community, and your input really counts,” Chief Penny Jones said.

She said the input from the class members gave her and her staff the opportunity to add some more topics to the program.

“I truly, truly have enjoyed this and I’m looking forward to the next class,” Jones said, urging the class to “spread the word; I want interested people to get involved. We had several great topics. You all had the opportunity to listen to the judges talk, the sheriff came and spoke and it gave you all a better idea of what we were doing at the police department.

“I truly hope you all have enjoyed being with us, spending time with police officers for the last 10 weeks and I surely hope you’ve told your friends and family about the program,” she added.

Jones said the next class is tentatively scheduled for October. “So we’ll be taking applications, and so many people have already expressed an interest in wanting to participate.”

During the 10-week academy, the residents learned about the different divisions in the department and did a ride-along, where they rode with a uniformed officer on a patrol shift.

The final class looked at a crime scene investigation, where the residents worked a mock crime scene.

Jones, her deputy chiefs, supervisors and other officers served as instructors during the academy, which allowed the participants to meet and talk with the officers in a relaxed setting.

Andrea Upchurch, one of the participants, said the program was wonderful.

“It gives me a new healthy respect for the police officers and for the chief and the deputy chiefs and all their staff,” she said. “I see a unity there I’ve never known before and I learned a lot. I appreciated the invitation. It was good.”

“The city of Vicksburg should be proud of our police force,” he said. “They really represented themselves well during this program. I’m very impressed with the outcome.”

Speaking to the participants, Mayor George Flaggs Jr. called the academy “a good idea; a marvelous idea. This is what makes this community the community it is and this city the city it is, because of how we collaborate and how we connect.