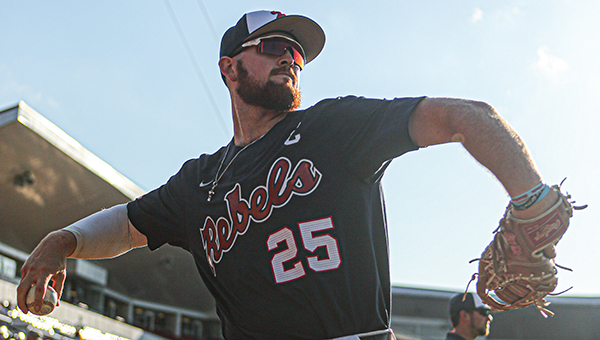 Ole Miss baseball player Tim Elko warms up before a game against Texas A&M in May. Elko and the Rebels beat Oklahoma 4-2 on Sunday to win the school's first baseball national championship. (Reed Jones/Ole Miss Athletics)

OMAHA, Neb. (AP) — Tim Elko’s presence as a leader has loomed so large over the Ole Miss baseball program that coach Mike Bianco has suggested, maybe only half-jokingly, that a statue should be built of him.

Elko had his own idea for a statue after the Rebels swept Oklahoma in the College World Series finals for their first national title.

“I kind of just want one of all of us holding the national championship trophy,” he said. “That’s all I want.”

The Rebels returned to Oxford on Monday and were to be feted during a welcome-back celebration at the Walk of Champions on campus. A championship parade is scheduled for Wednesday in Oxford.

Elko came to symbolize Ole Miss’ rocky journey to the title, not just because he was team captain the past two years but also his perseverance through a devastating injury.

The legend of Elko took off when he played nearly half the 2021 season on a torn anterior cruciate ligament in his right knee and still batted .325 with a team-leading 16 homers.

When he and roommates Kevin Graham and Justin Bench weren’t selected in the Major League Baseball draft, the three decided together to run it back. Elko had knee surgery and set his sights on 2022.

“We came back to play one more time as a team and go for the shot to win a national championship,” Elko said, “and obviously we did that. It feels amazing.”

The season appeared to be headed toward more heartbreak eight weeks ago. The Rebels were 7-14 in Southeastern Conference play on May 1 and their NCAA Tournament hopes were in peril. They finished SEC play 14-16 and came out of the SEC Tournament 32-22 overall.

The Rebels sneaked into the NCAA Tournament as the last team to receive an at-large bid and swept through regionals and super regionals on the road before making their title run in Omaha.

Elko was the rock, batting .300 and leading the Rebels with 24 home runs and 75 RBIs while starting all 65 games at first base. Elko ended his career with 46 homers, second most in program history to the 48 that Kyle Gordon hit from 1984-87.

“Ole Miss means the world to me,” Elko said. “I remember following the draft. I was praying and trying to figure out what I was going to do, and God told me that I’m not done here at Ole Miss. I listened to that, and I was like, ‘All right, well, let’s do this thing then.’

“I came back, and it was the best decision I could have ever made.”

Elko got off to a slow start in the CWS. He finished with a .280 batting average in Omaha and struck out 10 times in 25 at-bats. He hit two home runs, though, including a big one in Game 1 of the finals, and was his usual steady presence.

As he basked in the joy of winning the title, Bianco spent a moment to reflect on the tough endings Elko endured before he finished his career on the highest possible note.

“Lord knows Tim and the other guys, they’ve been through that enough,” Bianco said, “so they deserve this.”