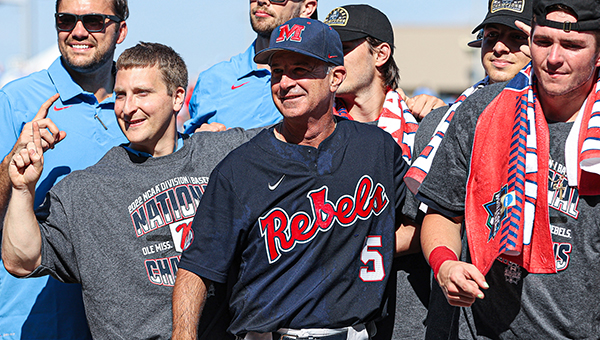 In the span of a month, Mike Bianco went from being on the hot seat to being the best coach in the country.

The Ole Miss skipper has been named the National Coach of the Year by both Collegiate Baseball and the American Baseball Coaches Association.

The Collegiate Baseball award was announced Tuesday, and the ABCA award on Wednesday.
Bianco finished his 22nd season as Ole Miss’ head coach by leading the team to its first national championship.

Ole Miss was 24-19 overall, and 7-14 in the Southeastern Conference, after losing a series at Arkansas on May 1. It then ripped off a seven-game winning streak and won 18 of its last 22 games.

The Rebels received the last at-large bid to the NCAA Tournament and then went 10-1 from that point on, capped by a 4-2 victory over Oklahoma on Sunday in the College World Series finals.

During his 22-year run in Oxford, Bianco has coached the Rebels to 18 NCAA Tournament appearances, including eight Super Regional appearances and a pair of trips to the College World Series. With 854 career wins, he ranks third all-time in the SEC behind only Ron Polk and Skip Bertman.

Bianco has also coached the Rebels to four-straight 40-win seasons, one of four programs in the nation to do so.

Ole Miss celebrated its championship with a brief parade in the Grove on Monday, and will have another parade through Oxford on Wednesday. Wednesday’s parade will begin at 5:15 p.m. and will be followed by a celebration event at Swayze Field.