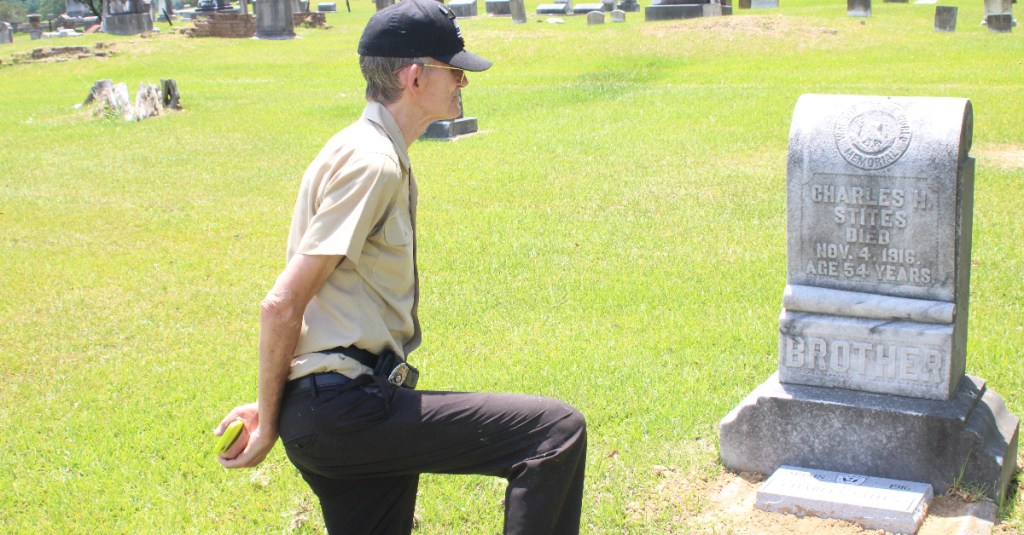 On June 24, 2022, 106 years after he was shot while investigating a noise on Washington Street, Charles Stites was recognized as a hero.

There was no elaborate ceremony, no firing squad, just the simple act of Ronnie Gibson of Gibson Monuments & Vases placing a marker at Stites’ grave in Cedar Hill Cemetery that said, “Killed in the Line of Duty.”

Stites, 56, a Vicksburg police captain and 20-year veteran in the department, was shot and killed when he heard glass breaking, went to investigate and interrupted three men burglarizing a downtown store.

Stites’ marker is the latest of four markers that have been placed at the graves of former law enforcement officers found by retired Vicksburg police officer Doug Arp, who since 2017 has been looking for officers who were killed in the line of duty and whose sacrifices have gone unnoticed.

“There are many officers in the Vicksburg and Port Gibson area and we’ve found 10 or 11 of them,” Arp said. “They’re scattered all over some in the cemeteries in the county and the city. One by one, we’re trying to find as many officers marked as possible. All killed in the line of duty.”

The first officer Arp found was Clarence Lanier, a sheriff’s deputy who was killed on Aug. 10, 1930, by two men outside a business called the Old Log Store on what was then Mississippi 27 in Warren County, south of Vicksburg.

The officers’ graves are marked by a simple grave marker with the officer’s name, the date he was killed, an etching of the department’s shoulder patch and the words, “Killed in the Line of Duty.” Gibson donates the grave markers.

“So far, we’ve done four officers; two in Port Gibson,” Arp said. “We know of four or five more and I’ve found one that is not on the police department’s memorial. Ronnie’s going to etch that one in.”