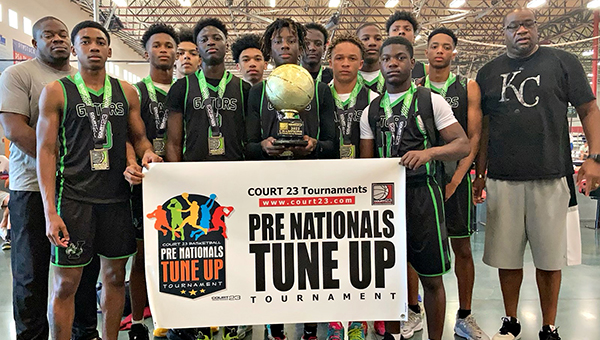 Vicksburg High's boys basketball team celebrates its championship in the Pre Nationals Tune Up Tournament in Texas in June. The Gators went 27-1 during their summer schedule. (Submitted to The Vicksburg Post)

In his nearly two decades as an assistant and then the head coach of Vicksburg High’s boys basketball team, Kelvin Carter has seen his share of great teams roll through town.

Carter’s Gators racked up an astonishing 27-1 record during a June barnstorming tour that included a mix of tournaments and traditional summer league games. Most of the wins were blowouts. The success, and the flair with which the Gators achieved it, has Carter drooling over their potential.

“I’m glad I’m getting a break to be with my family and everything. But I didn’t want it to stop,” Carter said with a laugh. “Sitting there watching it, I was asking Coach Williams and Coach Bell, ‘Are you seeing what I’m seeing?’ These guys look well. They’re small, but they’re diving after loose balls, taking charges — everything we’ve been trying to get them to do. It’s starting to come together.”

Vicksburg finished 12-17 last season and lost to New Hope in the second round of the MHSAA Class 5A playoffs. Only one senior left from that team, however, and there are two currently on the 2022-23 roster.

Vicksburg’s tallest player is 6-foot-6 junior Kameryn Bailey, and no one else is over 6-foot-2. Carter said what his team lacks in height it has made up for in speed and teamwork. As a guard-oriented team, they’ve been able to run opponents off the floor when the opportunity presents itself, even against several Class 5A and 6A teams with a lot more height.

“The games have been tight into the third quarter, and then it’s like they say, ‘We’re ready to play,’ and we end up winning by 15 or 20,” Carter said. “I never saw that happening. I knew we could win some games, but the togetherness and the cohesiveness that they’ve got it’s like they know when this guy is going to go back door for a pass and we haven’t even worked on it. They just know each other.”

One of the most impressive facets of the Gators’ summer, Carter said, was the way they’ve learned to handle success. In several games last season they had big early leads slip away. In June, they kept the hammer down and rolled to a number of blowout victories.

“We’re learning how to manage the game. We were up in a lot of games last year, but being young we didn’t know how to hold the lead. Now we constantly build on that lead instead of blowing that lead,” Carter said. “When you look at your team, you think they’re going to be able to win a game. But you don’t think they’re going to be able to have separation in a game like that, against some of these teams we’ve stacked up against this summer.”

Another reason Carter is excited about the upcoming season is the landscape of Class 5A. Whenever the Gators have had great teams in the past decade or so, they’ve always run into one of the state’s top players.

The 2011 team that reached the Class 6A championship game lost to a Meridian squad led by future NBA star Rodney Hood. The 2014 team couldn’t get past Callaway’s Malik Newman, considered one of the best high school players in Mississippi history. More recently, it was Callaway’s Daeshun Ruffin — now a standout at Ole Miss — who vexed them inside their own region. 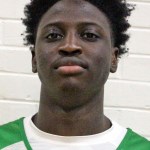 No one, Carter says, has that kind of elite player on its roster for next season.

“In 5A there are no more Ruffins. There’s no more Maliks. There’s no more phenomenal guys. They’re just basic basketball players now,” Carter said. “So you straight up tip the ball off, let the chips fall where they may, and it could go either way. Nobody has ‘that guy’ right now. (Class) 4A has a couple of them, 6A has a couple of them. But 5A, it’s just, ‘Let’s go play.’”

If there is a player of that caliber in Class 5A, Carter thinks it might be on his own roster. Senior Malik Franklin, a 5-foot-11 guard, has emerged as a high-end player this summer after averaging 13.2 points per game last season.

For as good as they’ve looked over the past month, Carter cautioned fans that the Gators might get out of the gate a little slow when the season tips off in November.

A half-dozen players are on Vicksburg’s football team as well, and that squad is expecting to be in the playoffs for most of November. It might take a few more weeks for them to get into basketball shape when they eventually return to the court.

Carter, though, is willing to be patient. Based on what he’s seen so far, it’ll be worth the wait.

“The next two years we’re trying to get in that Coliseum. We really are. We’ve played some tough teams this summer, teams with 6-7 and 6-8 players, and we’ve held our own,” Carter said. “If this summer is any indication of the way the season’s going to be, we should have a great season.”