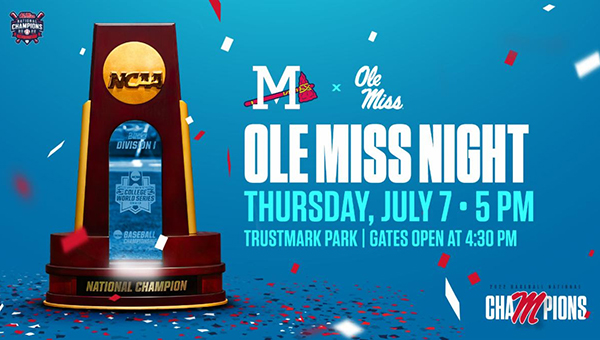 PEARL — Mississippi’s fans can share a piece of history and get a pretty good deal Thursday night.

The Mississippi Braves will host Ole Miss Night at Trustmark Park, and as part of the promotion the Rebels’ 2022 College World Series championship trophy will be on display.

Fans will have the opportunity to get their picture made with the trophy in the Farm Bureau Grill & Outdoor Patio from 5 to 8 p.m.

All fans wearing Ole Miss gear to the Trustmark Park box office can also purchase a field level ticket for only $5 as the M-Braves take on Pensacola in a doubleheader.

Game one — which was rescheduled from Monday because of rain — will begin at 5:35 p.m. and game two about 30 minutes after the conclusion of the first game. Gates open at 4:30 p.m. Tickets are good for both games.

Other promotions for Thursday include 16-ounce beer, fountain drinks and tacos for $2; free field level or general admission tickets for all active or retired military with a valid ID; corn hole games and live trivia in the Farm Bureau Grill.

The M-Braves’ series with Pensacola continues through Sunday. After that, they’ll stay at Trustmark Park for another series against Rocket City beginning July 12.