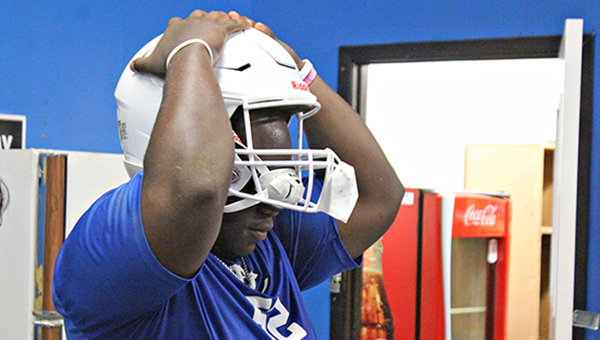 After ending a seven-year playoff drought and notching a winning record for the first time since 2008, everyone involved in Porter’s Chapel Academy’s football program was eager to take the next step in 2022.

They just were not in a big hurry to get back to work.

The Eagles skipped spring practice and instead focused their offseason workout program on June and July. It was a decision as practical as it was philosophical, head coach Blake Purvis said, since most of his players were busy playing baseball and running track anyway.

“We haven’t done (spring practice) in four or five years,” Purvis said. “Most of our guys go from football to basketball to baseball. I like giving them a break. They seem a little more refreshed coming back in the summer. With the amount of returners we have, I think we’re right where we should be.”

The first part of PCA’s offseason football program concluded with three workouts last week. They’ll take this week off for the July 4 holiday and a mandated dead week, then return Monday for two more weeks of conditioning.

Two-a-day practices start July 25 and are quickly followed by a scrimmage at Prairie View on Aug. 4, a jamboree at Tallulah Academy Aug. 11 or 12, and the season opener Aug. 19 at home vs. Kemper Academy.
Football activities will take precedence in July, Purvis said, while June’s focus was on conditioning.

“Our quarterbacks need to get their arms in shape, get football motions back into them after playing baseball. Most of our guys are so involved in other sports that physical conditioning isn’t as bad as it could be,” Purvis said. “We usually focus in June on conditioning and weights and all that, and in July we’ll amp up football drills.”

PCA finished with a 6-5 record in 2021, which was modest by many standards but a huge leap forward for the program. It was the school’s first winning record since 2008, and resulted in the first playoff appearance since 2014.

The Eagles lost 44-36 to Tallulah Academy in the first round of the MAIS Class 2A playoffs. They return seven of eight defensive starters in 2022, but must replace a lot of key offensive players.

The four graduated starters on offense include quarterback Jace Riggs, running back Tyler Washington, wide receiver Willie Rogers and center Bridges Williams. Riggs passed for 1,338 yards and 19 touchdowns. Rogers caught 44 passes for 686 yards and five TDs, and Washington was The Vicksburg Post’s Offensive Player of the Year after rushing for 1,346 yards and 21 touchdowns. Williams was an MAIS All-Star.

“We lost about 95 percent of our offense, with Jace, Willie and Tyler. Bridges is going to be a big loss at center. Offensively, we’re going to have some work to do,” Purvis said. “We’ve got young guys that have the ability to step up. We’ve just got a different type guy than we’ve had in the past. I think we can adapt the scheme to that and be successful.”

The loss of so much offensive production has sent Purvis back to the drawing board — more to tweak his scheme than find new personnel. The team is more talented at receiver than in recent years, he said, which has led him to find ways to better utilize them instead of leaning on a pounding running game like in 2021.

“I believe we are as strong at receiver as we’ve ever been. Figuring out our run game is probably the biggest piece we’re going to have to figure out and fill in,” Purvis said.

PCA is heading into its second full season in the MAIS’ eight-man division. It played several eight-man games in 2019 and 2020 before fully making the switch, and its junior high program has played eight-man for longer than that.

At this point, Purvis noted, the roster has more players who have never played an 11-man game than those who have. No longer having to deal with the adjustments from one style of football to another will be beneficial when preseason practice begins.

“We’re left with a group that played it seventh through ninth grade. That’s all they’ve ever played,” Purvis said. “I think we’ve got a better feel for it. I thought by the time we got to the late part of the season and the playoffs last year, we were in a much better spot than we were in games one and two. Them having a full year of high school under them and the experience we have coming back, we’ll be more prepared for it this year.”