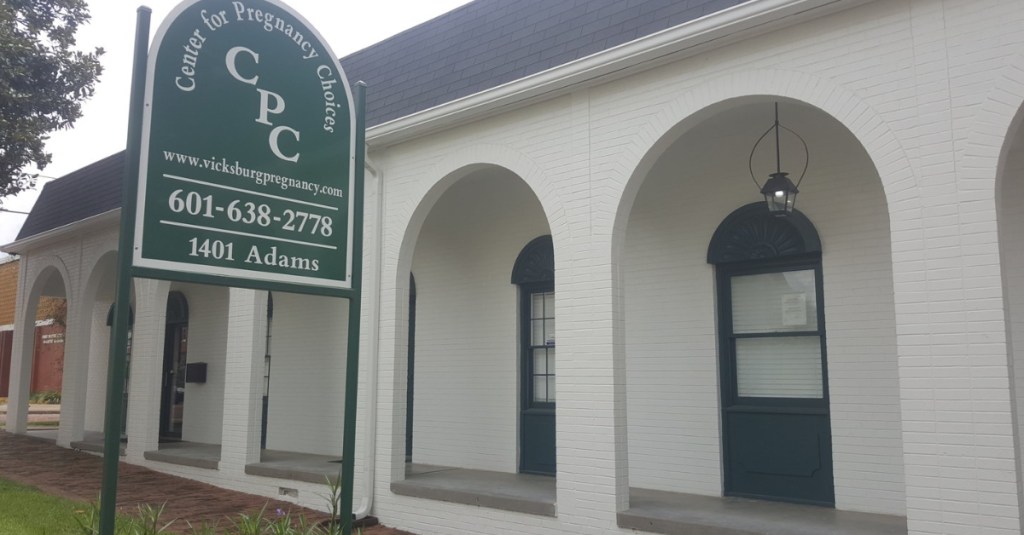 The Center for Pregnancy Choices is located at 1401 Adams St. in Vicksburg. (Photo Submitted)

It’s ringing both with women calling to ask if the center offers abortion services, and for women who are choosing birth. And as Mississippi’s only abortion clinic closed its doors for good on Thursday and reality sets in that more crisis pregnancies will happen in the state, the CPC’s Executive Director Shannon Bagley says the organization is ready to step up to the plate.

Moreso than that, she said, they’re ready to do so by educating women about their options when faced with an unplanned pregnancy.

“The decision, we had been waiting on for a while. For us as a center, our goal has always been to support women in crisis pregnancies, to inform, to serve. And that will not change; if anything, it will grow exponentially,” Bagley said.

She added that the center is working to employ more staff members and attract more volunteers as it faces an increase in clients.

Bringing forth a cultural shift

However, the Center for Pregnancy Choices can’t do it alone — both Bagley and CPC Client Services Director Michelle Johnson said the June 24 SCOTUS decision in Dobbs v. Jackson Women’s Health Organization needs to result in a culture change if the lives of women and children in crisis pregnancies are going to change for the better.

“This is a great time for churches to redefine their missions, to become more relevant in the community,” Johnson said. “I think the churches need to start by talking to their membership, educating them about what’s actually happening and empowering their outreach. Because if women have not necessarily gone there before, they’re not going to show up at the church door.”

Johnson said she believes churches need to be strategic about being seen as a place of help in the community, suggesting increasing food distribution, events for communities to get to know them, backpack giveaways or even sending letters.

“This is a great time for pro-life people to redefine how people look at us,” she said. “It’s a time for the church to find something we can win at.”

It’s also time for churches and parents to teach their children about sex in a way that is informative and accurate, they said.

“Parents just can’t say, ‘Don’t do it,’ and expect that to be enough,” Johnson said. “We need to embrace it and say, ‘If you mess up, I am the first person you should come to. You need to be the expert, so your child wants to come to you first.'”

The Center for Pregnancy Choices is just that — a center for choices.

While it is a Christian organization, Bagley said that doesn’t mean its goal is to convert non-believers or coerce women to make a choice about their pregnancies without knowing the full extent of their decisions. Instead, when a pregnant woman comes through its doors, they are presented with all their options: abortion, adoption and birth.

The materials on abortion include a video that explains both surgical and medication abortions. The video is narrated by a doctor who performed more than 1,500 abortions before leaving the practice, and Bagley said it’s presented in a factual, non-emotional manner.

“It’s strictly facts, explaining what really goes on when you undergo that procedure,” she said. “There’s no emotion, no persuasion. However, I do think a lot of women are naive when it comes to the mental and physical trauma that can be caused by abortion.”

The center also offers post-abortion counseling to women who choose abortion and either regret their decision or simply need someone to speak to about it. While abortion is no longer legal in Mississippi, women are still free to travel out-of-state for services. They can also mail-order the two pills used in medication abortions and have them delivered to their doors in unmarked packages.

When that happens, Bagley said, the center’s position is again not one of judgment but one of offering support.

A first glimpse at motherhood

All women who come to the CPC are also offered a free non-diagnostic sonogram.

For many, in a state with a high uninsured population, this is one of very few opportunities they have to see their baby in utero. It’s a service Johnson described as a first step to understanding the importance of prenatal care — something Mississippi is notorious for neglecting.

“The sonogram has been especially important in Warren County, where we’ve previously been limited in OBGYN services. I think CPCs try to stand in the gap for your first trimester, due to lack of insurance and lack of physician availability,” Johnson said. “We’re giving them prenatal vitamins, giving them the opportunity to apply for insurance.

“We’re also giving them the first look at the baby, even though we’re not diagnostic, which allows them to step into that mindset.”

The Center for Pregnancy Choices serves thousands of women each year — and women who choose birth for their babies are incentivized to prioritize their health in addition to their babies.

Through the center’s “Earn while you Learn” program, women are provided with the physical items needed to care for a baby as well as counseling services and parenting classes — even financial workshops to set them up for lasting success in parenthood.

“We also partner with a program that, if they sign up for it, they will get money for every (prenatal) visit they go to,” Bagley said. “And in addition to that, we help them apply for insurance and government assistance. We are looking not just at birthing that baby, but the bigger picture.”

Looking to the future

As more babies are born in Mississippi, Bagley said she and her staff know challenges are inevitable.

Crisis pregnancies will continue to happen, and when they do, the CPC won’t turn away those seeking help.

“Our main focus is ‘Mom healthy, baby healthy,'” Bagley said. “We see women of all walks of life; crisis is no respecter of person.

“We’re going to grow and people are going to come here more often, because we are going to see more crisis pregnancies,” she added. “While you still can drive out of state (for an abortion), hopefully, we will be the first place these women stop.”