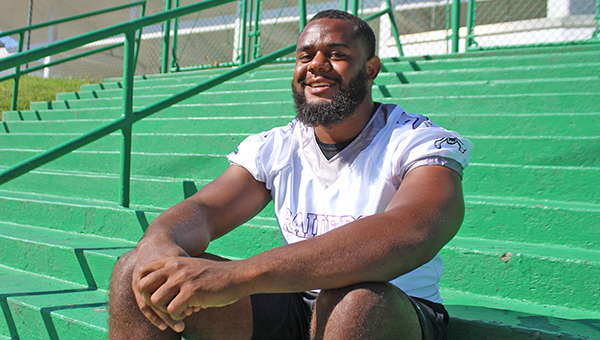 Vicksburg High assistant football coach Solomon Muhammad is pulling double duty this summer by playing with the Mississippi Raiders of the American Indoor Football Alliance. The Raiders will play the Tampa Bay Cyclones in the AIFA championship game Saturday at 7 p.m. in the Mississippi Coliseum in Jackson. (Ernest Bowker/The Vicksburg Post)

Stashed in his unassuming white Toyota Camry are the tools of Solomon Muhammad’s trade.

A football jersey. Pads. A helmet.

They’re not out of place for a football coach, but they don’t belong to Muhammad’s players. They’re for him.
Muhammad, who is heading into his second season as an assistant coach for Vicksburg High’s football team, moonlights as a starting linebacker for the Mississippi Raiders indoor football team.

He joined the Raiders before this season and will lead them into the championship game of the American Indoor Football Alliance Saturday night in the Mississippi Coliseum in Jackson.

“You want to play football until you know you can’t. But it was just another opportunity to get a ring or be around some guys on a football team,” Muhammad said. “It’s fun to still be able to do it and then come teach my kids up here. It’s a blessing to do both.”

Muhammad was a first-team All-Southwestern Athletic Conference selection and third-team FCS All-American in 2019, his final season at Alcorn State. He led the Braves to SWAC championships in 2018 and 2019 as well.

Muhammad was not selected in the 2020 NFL draft, but has stayed active. He played with the Frisco Fighters and Duke City Gladiators — based in Frisco, Texas, and Albuquerque, New Mexico, respectively — of the Indoor Football League and took a job as Vicksburg High’s linebackers coach in 2021.

Muhammad grew up in Birmingham but has family in Vicksburg.

“We’re not new to the country stuff,” Muhammad said with a laugh. “I used to come to Vicksburg every summer. My granddaddy (worked) me. We would bush hog and rack up the hay and feed it to the cows. That’s how I learned to drive. He had us trying to tackle pigs and all kinds of crazy stuff. When we get on the field, it’s just fun. It’s a lot of country and city in me.”

The Mississippi Raiders were originally based in Hattiesburg, but moved to Jackson for this season as one of eight teams in the American Indoor Football Alliance. It didn’t take long for the team to recruit Muhammad. Team owner James Germany and a couple of players who knew Muhammad reached out to gauge his interest.

“A lot of people had been keeping tabs on me to see if I was going to keep pursuing my career in football, because they knew what kind of player I am,” Muhammad said. “But they doubt you once two years go by, three years go by. I just try to keep a positive attitude and let God handle whatever will happen.”

The Raiders started their season in late March, a few weeks before Vicksburg High started its spring practice, and it has continued through June and now July. It’s made for a busy four months.

Muhammad practices with the Raiders a couple of times a week and plays games on Saturdays. During the week, he’s on the field with the Gators for offseason workouts and drills.

“We practice in the morning, from about 7 to 10. Then the Raiders practice on Tuesday and Thursday (evening),” he said. “I try to balance out my schedule between going to practice in Jackson and being out there with the guys.”

Maintaining his status as an active player has helped with his coaching, Muhammad said. He’s still learning new techniques from professional teammates and opponents and passes them along to his high school players.

“I’ve been active with them, showing them how to do certain things on the field. I’m getting tips from everybody,” he said.

Muhammad added that it took a while for Vicksburg’s players to find out about his second job.

“They knew, but they didn’t take it serious. Once they saw that we were 6-0, they were like, ‘Dang, you play football!?’” Muhammad laughed. “I don’t bring my stuff to the school, but if they see it, they see it. It’s just something I love to do.”

Winning, he said, helps him love it even more.

The Raiders have a perfect 8-0 record heading into Saturday’s AIFA championship game against the Tampa Bay Cyclones. A 17-13 win over Tampa Bay on May 7 was one of only two games that were closer than three touchdowns.

“It’s always fun to strap on that helmet. But it’s even more fun when you’re winning,” he said with a smile. “Mississippi has been behind this sport for a lot of years, so it’s time for Mississippi to get on top.”

The Raiders and Cyclones will play at 7 p.m. Saturday, in the main event of a full day of indoor football in the Coliseum. The action begins at 10 a.m. with a youth league game and continues at 3 p.m. with an AIFA contest between the Las Vegas Kings and the Alabama Empire. Tickets are $20 and available at the Coliseum box office.

Muhammad said the AIFA often plays youth league games before the pro games as part of a community outreach program.

“I’ve never seen that where I’m from, with little leagues playing on the turf field in the dome. That’s unique,” he said. “Teams should start doing that nationwide so the kids get used to coming and seeing professional players. It gives them something to come and look forward to.”

The AIFA is one of several indoor football leagues operating in the United States. Indoor football is a variation on the sport. Games are 8-on-8 and played on a condensed, 50-yard field to fit the smaller confines of an arena.

It’s also a way to scratch the competitive itch and stay visible in the game.

Muhammad will turn 25 next week and hasn’t given up on making it to a higher level as a player. He was in the player pool for the USFL, which recently completed its first season, but did not get picked in its draft.

“I’m never going to be done playing if I keep my body in shape,” he said. “You have to prepare yourself mentally and physically. Working up here, staying active with (Vicksburg High), that keeps me in shape, so I’m trying to stay ready for whatever. You never know. You can be called at any time.”

Muhammad thanked his family for their support throughout his football journey, and Vicksburg High’s football players and coaches for supporting him during the most recent leg of it.
Now he’ll try to reward them by bringing a championship to Mississippi.

“That would mean the world,” he said. “Adding another ring to the collection and having three, just thanking God for putting me in another situation to get another ring because everybody doesn’t just get rings these days. You have to put yourself in position to get a ring.”