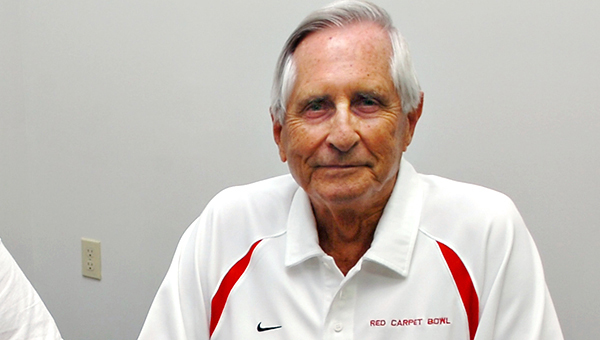 Gene Allen, a former football coach and local businessman who also helped start the Red Carpet Bowl, died Monday at his home in Vicksburg. He was 91.

Allen was a key figure in the story of high school athletics in Vicksburg in the 1950s and 60s. He came to Vicksburg in 1953 to coach at Carr Central, first as an assistant and then as head coach.

Allen helped Carr Central win the 1955 Big 8 championship and took over as head coach the following season. He stayed in that job for eight seasons, moving over to Cooper High School when it opened and Carr Central closed in 1959, and compiled a 48-28-5 record.

The group traveled to Biloxi to meet with Frank Barhanovich, the chairman of the Shrimp Bowl Classic, a similar game held on the Coast.

“We wanted to see what they were doing, organization-wise, that we were not doing. They were helpful and cooperative,” Allen said in a 2015 interview with The Vicksburg Post. “We had our tough goings in the early stages, but we never did feel like we were going to give up on it. When we left the Shrimp Bowl people, we realized we were closer than we realized.”

The inaugural Red Carpet Bowl was played in 1962 — Allen led his Cooper Greenies to a 13-6 victory over Columbus Lee — and it will celebrate its 60th anniversary this year.

Allen was the last surviving member among the original organizing committee.

“When we started, we had no earthly idea where it would go. We knew it would run at least two years,” Allen said in 2018. “There were a lot of things we needed to know about forming a bowl. Fortunately, I’m the only one who’s ever had his father as head of the Mississippi High School Activities Association. That’s where we went when we needed help.”

Travis Wayne Vance, a longtime Red Carpet Bowl committee member who played for Cooper High in the 1962 game, said Allen was more than just a coach. Vance recalled when his father became ill and he was failing a number of classes, Allen smoothed things over with teachers and gave him another chance to play football. Vance made all A’s the next period.

“I know of other football players that had similar situations and he went to bat for them,” Vance said. “He was like a second daddy to me.”

Allen retired from coaching in 1964 and began a long and lucrative second career as a Conoco gas station distributor in Vicksburg. He retired from that job in the 1990s.

Allen was also an avid golfer who played regularly well into his 80s. The Red Carpet Bowl Golf Tournament trophy is named the Gene Allen Cup, and Allen played in the inaugural event in 2017. His three-man team finished in ninth place.

Allen was a longtime member of First Baptist Church.

“He gave of himself. He was the right person for the right timeframe that he coached and was in business,” Vance said.

Allen is survived by his wife, Peggy, and children Scott and Amy. A memorial service celebrating his life will be held in the sanctuary of First Baptist Church, Vicksburg, on Friday at 2 p.m. A visitation will be held on Thursday from 5 to 7 p.m. at Glenwood Funeral Home.