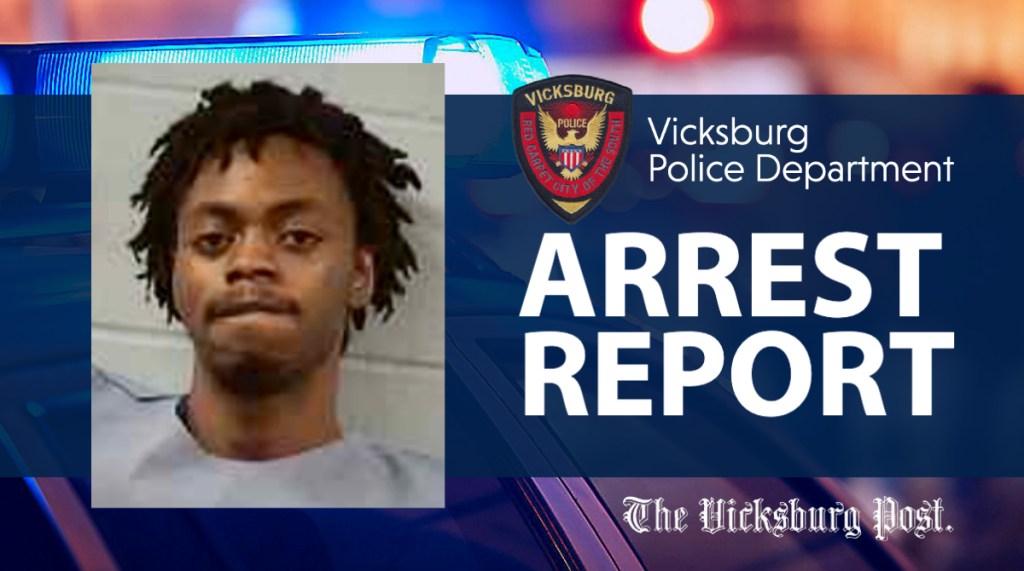 The Vicksburg Police Department released information on Monday about an arrest for shooting into an occupied vehicle, a separate report of shots fired into a vehicle, and multiple reports of theft.

Keandre Harris, 21 of Vicksburg, was arrested Saturday after he allegedly shot at an occupied vehicle in the 1400 block of Martin Luther King Jr. Boulevard.

According to a press release from the Vicksburg Police Department, Harris shot at the vehicle after the driver swerved to miss a dog lying in the road. One of the bullets shattered the windshield of the vehicle, causing the driver to leave the roadway and strike a fence.

Harris was taken into custody after being found hiding in a nearby residence shortly before 1 a.m. One of the two handguns in his possession at the time of his arrest was found to be stolen.

Harris appeared in Vicksburg Municipal Court on Monday. He was charged with shooting into an occupied vehicle, possession of a stolen firearm and possession of a firearm by a convicted felon.

He received a $100,000 bond and was bound over to the Warren County Grand Jury.

In other reports, officers responded to the 4400 block of Halls Ferry Road in reference to shots fired at 8:30 p.m. on Friday.

The complainant reported someone fired several shots into her 2017 Toyota Corolla near the intersection of Halls Ferry Road and Porters Chapel Road. Neither of the two occupants of the vehicle were injured. Several shell casings were recovered in the area. The case is currently under investigation.

A burglary was reported on Friday at 10:37 a.m. that occurred in the 4400 block of Halls Ferry Road.

The victim reported that someone entered a 2020 Ford F-150 and stole a 9mm Smith and Wesson handgun and two boxes of ammunition. The vehicle had been left unlocked. The case is currently under investigation.

Officers responded to the WaterView Casino at 4:08 p.m. on Saturday in reference to a report of a pressure washer that was taken from the bed of a truck.

The victim stated a black and gold Brute brand 2700-PSI pressure washer valued at $250 was missing. The case is currently under investigation.

Officers responded to Eastview Apartments in reference to an auto burglary at 5:54 p.m. on Saturday.

According to the vehicle owner, someone entered a GMC Acadia and took an AT&T Galaxy 4 cellphone that is valued at $2,000.00. The case is currently under investigation.

Officers responded to The Crossings Apartments in the 2100 block of South Frontage Road in reference to vandalism and theft at 12:42 a.m. on Monday.

Entry to the apartment was gained through an unlocked door.

Honda Accord stolen from in front of house

Officers responded to a residence in the 500 block of Feld Street in reference to a stolen vehicle at 2:53 a.m. on Monday.

The victim reported that a 2005 Honda Accord was stolen from the street in front of the house. The case is currently under investigation.