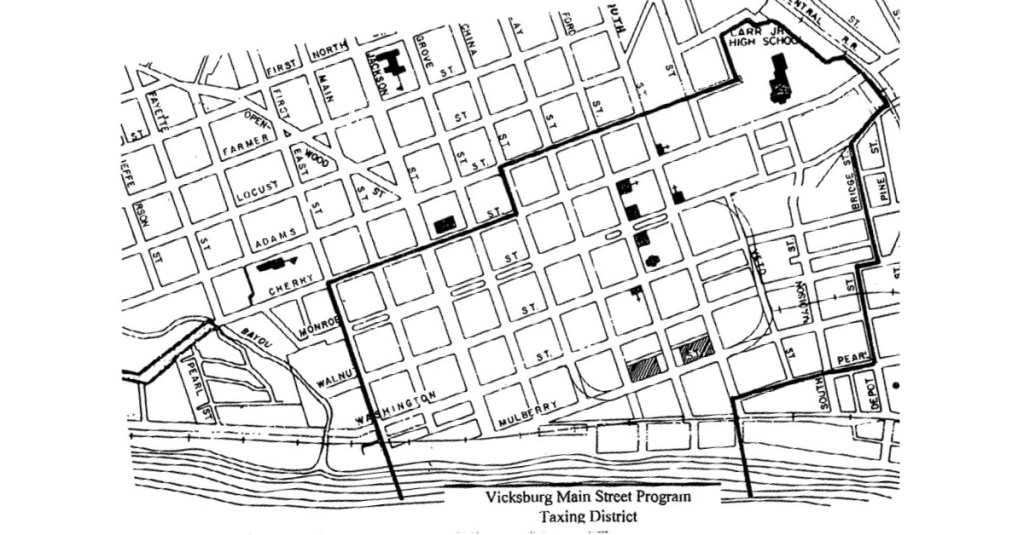 This map shows an outline of the Downtown Vicksburg Main Street Program taxing district. (Graphic courtesy of the city of Vicksburg)

The Vicksburg Board of Mayor and Aldermen will hold a public hearing at its Aug. 25 meeting to discuss the proposed renewal of a special 5.05 mill property tax on businesses in the downtown business district to support Vicksburg Main Street.

Main Street officials are seeking to continue the special millage, which comprises a portion of Main Street’s budget to purchase supplies and advertising to support and promote Main Street. Information on how much money the millage is expected to raise was unavailable.

“The Downtown Taxing District was created in 1988 and is authorized by the city of Vicksburg on an annual basis. Property used as hospitals, schools, religious organizations, charitable nonprofits, public facilities or homesteads will continue to be exempt from assessment,” said Main Street Executive Director Kim Hopkins. “The mileage is a set boundary designating the taxing area.

“It has been over 15 years since the boundaries of this area have been altered,” Hopkins added. “This tax is used primarily for the promotion and economic development of downtown, including facade grants, increased security, tourism development and also small business incentives.”

The remainder of the program’s budget is provided by a supplement from the city to cover salaries and benefits and other costs not covered by the millage. The city’s fiscal 2022 supplement was $186,463.

The tax is levied on all commercial property in the city’s special taxing district.

The Vicksburg Main Street Program Taxing District encompasses much of downtown starting east on First East Street cutting south on Cherry Street moving east one block on China Street and continuing south on Adams Street incorporating Carr Central School and picking back up on Monroe Street. It goes north on Monroe and turns west down Bridge Street and continues east on Depot Street before it turns back north on Pearl Street and stops at the end of the street.