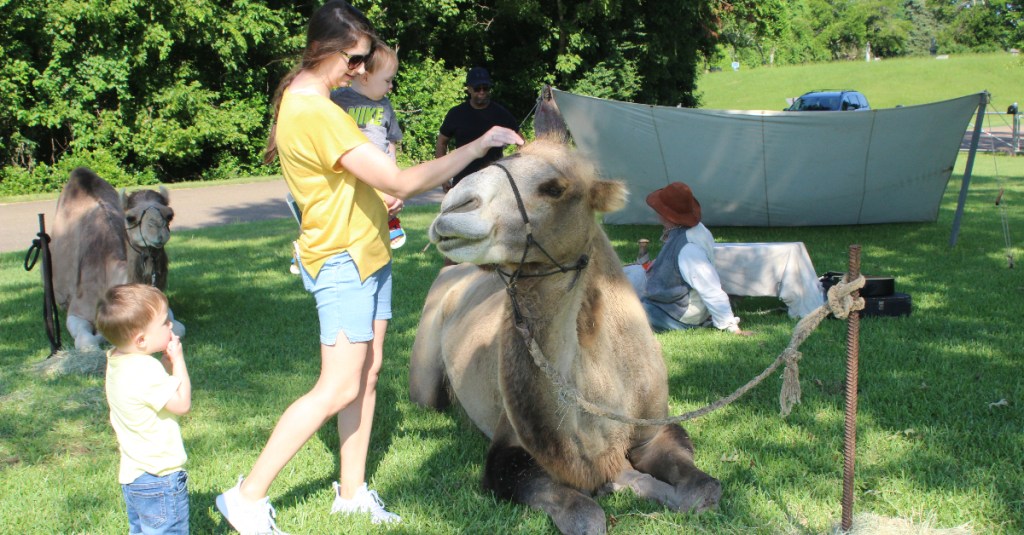 Visitors to the Vicksburg National Military Park get a close look at one of the camels on display by the Texas Camel Corps. during a visit on July 4, 2021. (Photo by John Surratt | The Vicksburg Post)

The Texas Camel Corps, a reenactment organization that teaches people about the use of camels by the United States Army in the 19th century, will be at the Vicksburg National Military Park on Saturday to commemorate the service of Old Douglas, a camel that served with the 43rd Mississippi Volunteers during the Vicksburg siege and campaign.

The camels will be available to the public from 9 a.m. to noon on Saturday and Sunday at the park’s visitors center. The event is free with the park admission and sponsored by the Friends of the Vicksburg National Park and Campaign.

“The camels will be in a shaded area by the visitor’s center,” said Brendon Wilson, the park’s chief of interpretation, education and partnership. “Visitors will be able to see them as they come out of the visitor center.”

Camels were introduced to the U.S. Army in the 1850s when then-Secretary of War Jefferson Davis had camels imported as an experiment to see if they would serve better than horses in the southwest, where the U.S. Army was engaged in wars with American Indian tribes.

The camels were later released and roamed wild in the southwest. Old Douglas, however, was purchased by a planter in Alabama as an experiment to see if camels could be used as farm animals.

He was later purchased by another individual and donated to the unit, where he served as its mascot and carried band instruments.

Old Douglas was killed by a Union sharpshooter during the siege and was eaten by the troops, who were low on food. He is remembered by a headstone among the Confederate dead in the Soldier’s Rest section of Cedar Hill Cemetery.