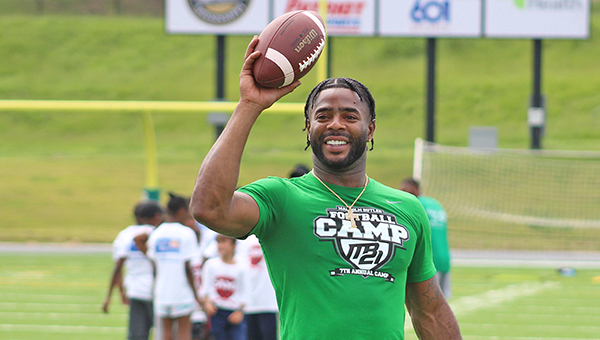 Malcolm Butler is back in the NFL, and so is the summer tradition he started in his hometown of Vicksburg.

It’s one of the largest turnouts ever for the camp, which the New England Patriots cornerback started in 2015.

“This has been one of the best ones since we started,” said Carolynn Bingham, one of Butler’s former teachers at Vicksburg High and a member of the camp’s organizing committee. “The first camp, of course, we had as many kids as we could handle. We had close to 370 kids, I think. We realized that was too many for number of coaches and volunteers that we had and it was overwhelming. We decided to scale it back and keep it at a workable number of between 300 and 325.”

Registration for the camp closed in the spring, but Bingham said there is a waiting list and a very limited number of walk-up spots available on Saturday morning. Walk-up registration is based on the number of pre-registered campers who do not show up.

“The kids that have pre-registered will be the ones that we check in first. We’ll have a waiting list, just in case,” Bingham said.

Check-in for those who pre-registered begins at 7:15 a.m. and the camp itself starts at 8. Children in grades 1-6 will participate in the Malcolm & Me Camp that includes less intensive activities, while those in grades 7-12 will have a camp focused on more serious football drills.

The camp is free.

“He just wants the kids to come and have fun. Everything they do that day is free. They don’t need to have any money or bring any personal items with them, because we don’t have any place to put them,” Bingham said. “This has been a labor of love since its inception.”

Parents are allowed to watch from the stands, but are not allowed on the field. The camp will end at noon, and Bingham asked that all children are picked up by 12:15 p.m.

Bingham said campers do not need to bring their own water — hydration stations will be positioned around the field and there will be frequent breaks — but should dress appropriately in gym shorts, T-shirt and tennis shoes.

“If the kids want to bring a towel with them, that’s all they need. But they need to dress in gym shorts or lightweight shorts. We’re trying to keep them from overheating,” Bingham said. “They don’t need anything but regular tennis shoes. No cleats are allowed on the track or on the field.”

The camp will be led by Butler, Vicksburg High’s coaching staff, and other college coaches and players. It was started in 2015, following Butler’s star-making interception to clinch the New England Patriots’ Super Bowl XLIX victory over the Seattle Seahawks at the end of his rookie season.

The cornerback retired from the NFL days before the 2021 season began, but returned this offseason. He signed with the New England Patriots — the team he won two Super Bowls with before leaving as a free agent following the 2017 season — in March.

Butler first played with the Patriots from 2014-17, and then the Tennessee Titans from 2018-20. He signed with the Arizona Cardinals in 2021 but only played in two preseason games with them before his brief retirement.

Butler has played in 100 games in his seven seasons in the NFL, and has 17 career interceptions.

MALCOLM BUTLER FOOTBALL CAMP
• Saturday, July 16, at Vicksburg High School
• Check-in begins at 7:15 a.m.
• Camp runs from 8 a.m. to noon
• Registration for the free camp has closed, but a limited number of walk-up spots will be available based on space