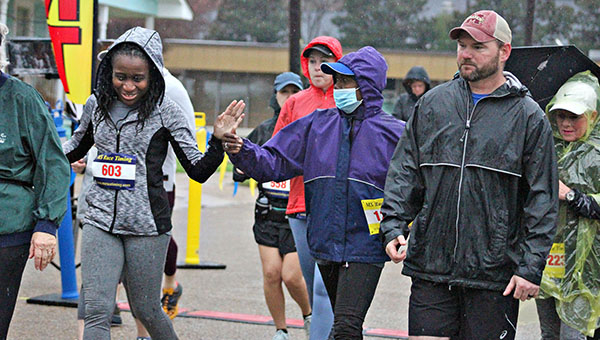 Anne-Marie Obilade (603) high-fives a fellow competitor as they cross the starting line for the Chill in the Hills 10K in January. After several years of weather issues, the organizing committee has decided to move the race to May in 2023. (Ernest Bowker/The Vicksburg Post)

The “chill” in Chill in the Hills will take on a different meaning starting in 2023.

The 10-kilometer run and race walk, which has been a January staple on Vicksburg’s sports calendar for 13 years, will move to May beginning next year.

The rebranded “Chillin’ in the Hills” will take place on May 13, 2023, race director Walter Frazier said. Frazier is also the director of Grace Christian Counseling Center, for which the race is a major fundraiser.

“I didn’t want to lose the name because it’s been going on for 14 years. We have some recognition that we’ve built. I think it’s a fun tweak,” Frazier said. “We’re trying to figure out how to draw Gracie, the snowman that’s been our mascot, with a Hawaiian shirt or something.”

The Chill in the Hills was started by the Vicksburg YMCA in 2009. When the YMCA took over as organizers of the Run Thru History in 2012, Grace Christian Counseling Center assumed control of Vicksburg’s winter 10K.

From the start, a winter theme was integral to the Chill in the Hills. Chili bowls were awarded as prizes and running on a cold January morning was a selling point. In recent years, however, a different type of weather became synonymous with the race.

Three times in the past four years, rain and thunderstorms arrived in Vicksburg on the day of the race. The bad weather tamped down attendance and hurt the event’s mission as a fundraiser.

“Having WLBT announce a weather alert day five days before the race would kill our attendance. We would raise $10,000 or $12,000 some years, and others we would break even,” Frazier said. “For the last four or five years it’s been disheartening to have all those volunteers donating their time, and then we have a fraction of the attendance.”

Other logistical issues also made the race’s early January date a challenge, Frazier added. Trying to shore up last minute details such as arranging volunteers to work the race and printing up T-shirts around the holidays was never easy.

“One of the challenges we had was getting sponsors and T-shirts over the Christmas break when everyone is out of the office,” Frazier said. “Everything just leaned toward, ‘Let’s move this to May.’ We’ll have all spring to get ready.”

Once the decision was made to move away from January, putting the race in May made sense, Frazier said. May is Mental Health Awareness month, which is in line with Grace Christian Counseling’s core mission of providing under and uninsured people in Mississippi mental health services at a reduced cost.

“For the first four or five years we had off and on years. Then we had that string of bad years. COVID dropped a lot of races and the calendar was wide open,” Frazier said. “May is Mental Health Awareness Month, so we figured what better time for us?”

Chillin’ in the Hills will now be the second of about eight 5K or 10K races on Vicksburg’s running calendar. The Run Thru History will start things in March, and the Reindeer Run 5K in December wraps it up. In between, events such as the Star Spangled Night Run 5K in June and the Over the River Run 5-miler in October have made Vicksburg the running capital of Mississippi.

Each of Vicksburg’s races has its niche and a unique gimmick. Chillin’ in the Hills will maintain some of its old traditions — the course, staging area at Martin’s at Midtown, and partnerships with the Mississippi Track Club and Mississippi Race Timing will remain — while also starting new ones.

Frazier said the race’s handmade chili bowl trophies, for example, will no longer be awarded.

“The chili bowls are out,” he said. “That’s been a challenge to get them, because they’re handmade. We’re searching for ideas. Chili bowls might not be as fitting for Chillin’ in the Hills.”

Among the gimmicks Frazier is hoping to start is a slot as a fun spring festival in downtown — preferably on a bright, sunny morning.

“We have to wait five months longer than usual, but we’re excited about it,” he said. “It could be a good late spring event. There are things we could accomplish like having a bigger after party.”