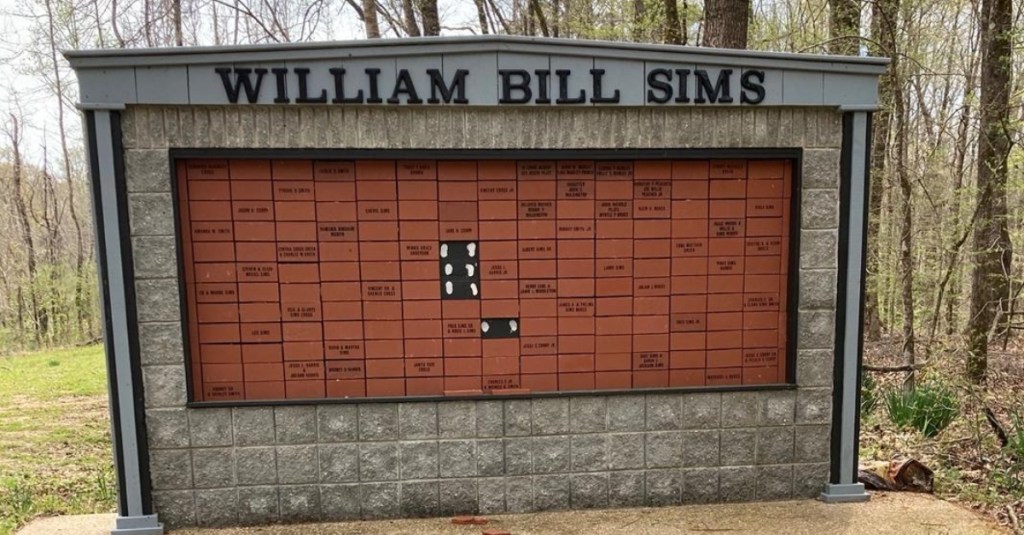 A marker honoring William 'Bill' Sims stands on the Sims family's ancestral property in Freetown. The Sims Family is working to turn the space into a park as a tribute to their ancestor. (Photo Submitted)

Thelma Sims Dukes has spent years piecing together the story of her ancestors, and this weekend, her family is gathering on a plot of land first owned by William “Bill” Sims, her great-great-grandfather, a former slave from Vicksburg who went on to serve in the U.S. Colored Troops during the Civil War.

Dukes, who is Black, has spent years gathering information about her family’s history — and has learned more about her ancestors than she ever dreamed possible. For example, in addition to her twice-great grandfather William, who was born into slavery in 1839 in the Vicksburg area, she also discovered the birth years of William’s parents. David and Elizabeth Sims were born into slavery in Virginia, in 1815 and 1820, respectively.

Dukes, who was born in Vicksburg and currently lives in Jackon, said it all began when she learned about the Freedman’s Savings Bank, which famously had a branch in Vicksburg at 1100 Washington St.

“(William Sims) had a wife named Judie. When I read about the Church of Jesus Christ of Latter-Day Saints having a collection of records from the Freedman’s Savings Bank, I sent off for it,” Dukes said. “And I found William, and his wife Judie and their daughter, Millie. And it kind of snowballed from there.”

While Dukes said she’s learned a great deal about her family from the LDS church databases and websites like Ancestry.com, as well as U.S. Census records and land records at the Old Courthouse Museum, the very first source in her genealogy journey was more precious than gold.

“The reason we know the birth dates and death dates of (William’s) children, is because my father kept a family Bible and we had those written down there,” she said. “My sister still has the Bible.”

Using the information from the family Bible, Dukes began digging.

She soon discovered her ancestor had not only been enslaved in his early life; he also was a freedom fighter.

“(The family) was moved here, and he enlisted in Vicksburg,” she said. “I have his enlistment forms as well.”

While traveling on a group trip to Washington, D.C., Dukes visited the African American Civil War Museum, where she not only saw her great-great grandfather’s name in stone, but also received documented proof of his military service.

“I have a certificate of honor that reads, ‘William Sims, 3rd Regiment, U.S. Colored Cavalry,'” she said.

Dukes also recently learned that, at one point, her father lived in the same home as William Sims.

“My father’s mother died when he and his brother were 5 and 6 years old. Their father, Stephen, went back home to his parents to help him raise those two boys,” she said. “So my father, when he was a child, lived in the house with William ‘Bill’ Sims.”

Furthering her pursuit to learn more about her lineage, Dukes completed a DNA test and learned her ancestors come from Spain, the Congo and other portions of West Africa.

Above, all else she said, she is proud to come from such a revolutionary man.

“I’m a historian from my heart. It feels wonderful, knowing all this,” Dukes said. “That this man, a few years after slavery, was able to purchase 100 acres of land and keep it until he died. He was a freedom fighter.

“Knowing that a few years after the war, he opened a savings account — he was unique, and I’m very proud of him.”

Ten acres of that land are still in the possession of his descendants, who are counted into the 9th generation. Forty-five years after he purchased the land and 11 years after his death, on May 24, 1941, a quitclaim deed covering 90 of the acres was filed in Warren County with his three surviving children’s names typed on the deed without signatures or X marks to indicate that they knew the land was being quitclaimed. A handwritten notice on the side of the deed stated that the “Press (was) requested not to mention.”

The family discovered they owned the land in 1982, and have been tending it ever since.

The descendants are currently establishing a foundation and developing a memorial park on the 10 acres.  The three-day family reunion celebration will include a tour of the Vicksburg National Military Park and the Vicksburg National Cemetery, where 5,500 African-American Civil War soldiers are interred — 40 percent of the 17,000 Civil War Union soldiers buried in the 116-acre cemetery.

Culminating the three-day celebration, on Sunday, family members will gather on the land to pour a ceremonial libation honoring their ancestors. Family member the Rev. JoeAnn Harris will be the keynote speaker for Sunday’s Memorial Ceremony.