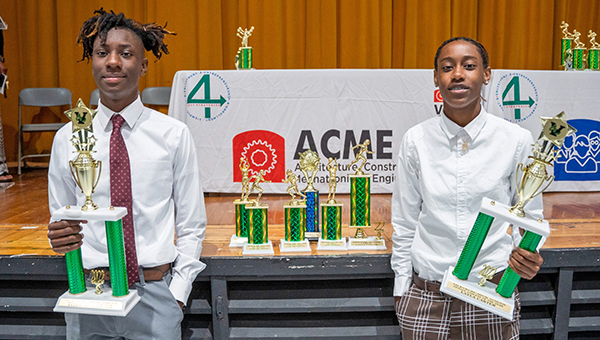 Vicksburg High's Tyler Henderson, left, and Layla Carter were named the school's male and female athletes of the year for 2021-22. Vicksburg native Johnny Rivers is trying to start another award that would honor the top high school athlete from all of Warren County. (Cedric Tillman/Vicksburg Warren School District)

It’s funny, in this business, how stories can cluster together. Sometimes it’s planned, like when you examine several different angles to a big topic. Other times, you get to talking to people about a story and several unrelated ones spill out of it as various things are mentioned.

Lately, I’ve found myself in a cycle of the latter.

Over the past month in this column I’ve written about several of the awards given to Warren County’s high school athletes, and even some of the ones The Vicksburg Post has received.

So what’s one more?

The company specializes in producing events like flag football, basketball and 7-on-7 tournaments, and has an arm that makes its own custom trophies as well. Rivers is also working on bringing a new sports-themed entertainment venue to Vicksburg.

With an eye for production and a love for his hometown, Rivers came up with an idea — why not have an athlete of the year award for Vicksburg’s high school athletes?

It would be a community effort. To make an informed decision and minimize the politics such an award could generate, Rivers wants to form a committee that follows the local sports scene all year, nominates candidates and picks the winner.

The award would be presented at a banquet at the end of the school year. The award and banquet would be funded privately, through various fundraisers and memorabilia raffles.

“We’re trying to bring things like that so they don’t fall through the cracks,” Rivers said. “The way I look at it from a distance is it gives an incentive for them to keep their nose clean and say this is something I want to earn.”

Hard to argue with that. Anything that offers a goal to work toward is worth a try. This sounds like one that, with a bit of involvement, could gain some traction.