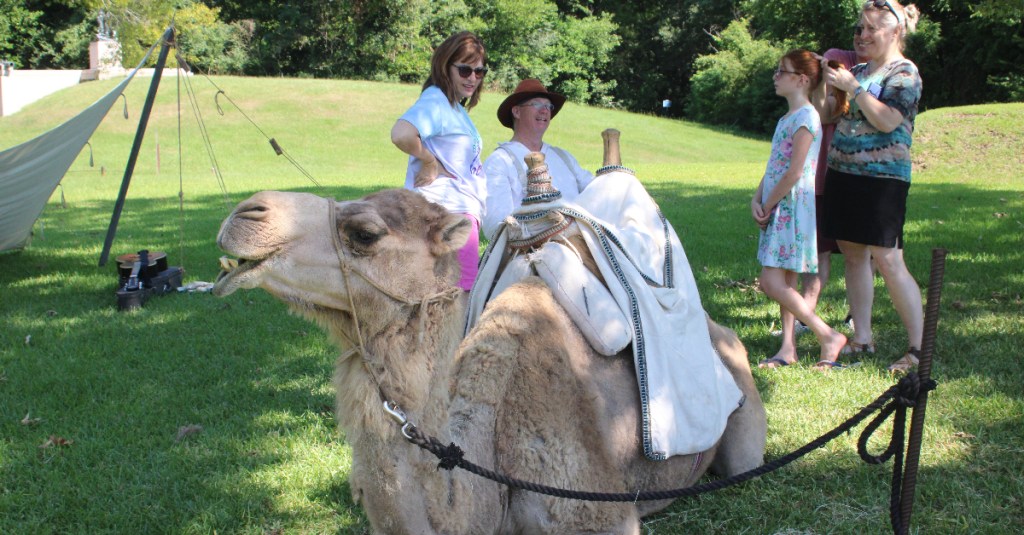 Dave Baum with the Texas Camel Corps, background, talks about Jefferson Davis' camel experiment while Cinco the camel enjoys the shade. Baum and his camels Cinco and Dasher were at the Vicksburg National Military Park Saturday. (John Surratt | The Vicksburg Post)

“I’ve been traveling to schools, libraries, national parks and historic sites with camels since 1997,” Baum said as he sat in the shade by the Vicksburg National Military Park’s visitor center strumming a guitar. “I think I’ve been coming to Vicksburg for 11 or 12 years now. I was here in 2013 for the 150th anniversary (of the siege).”

Baum, of Valley Mills, Texas, brings back the story of the Camel Corps, an experiment in the 1850s when then-Secretary of War Jefferson Davis had camels imported as an experiment to see if they would serve better than horses in the southwest, where the U.S. Army was engaged in wars with American Indian tribes and tells the story of Old Douglas, a camel that served as the mascot of the 43rd Mississippi Volunteers and carried the unit’s band instruments.

Davis’ camel experiment failed and the camels were released to roam the American southwest.

For years, popular legend claimed Old Douglas was one of the few camels retained by the Army. Later research, however, indicated he was one of a group of camels brought to Mobile, Ala., for farming. He was later purchased by another individual and donated to the unit.

“The story of the Army using camels prewar lands in Davis’ lap,” Baum said. “The story of Old Douglas is a parallel story. Forever and ever folks thought, ‘Well, he must have been one of those camels in Texas,’ but it makes more sense that he was one from a group of camels that was imported into Mobile.”

Old Douglas served his unit at the Siege of Vicksburg until a Union sharpshooter killed him. Because food was scarce, he was then eaten by the troops.

A marker for Old Douglas can be found in the Soldier’s Rest section of Cedar Hill Cemetery in Vicksburg.