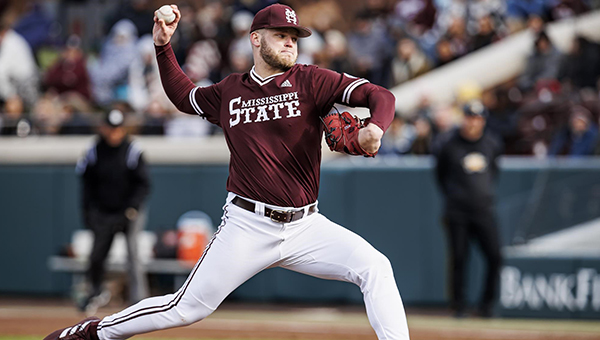 Mississippi’s college baseball programs are on top of the sport, and continued to stock the major leagues with rising talent this week.

Eighteen players from the state’s Division I colleges — six from Mississippi State, seven from national champion Ole Miss, and five from Southern Miss — were selected in the 2022 Major League Baseball draft. The three-day, 20-round draft concluded Tuesday.

Mississippi State pitcher Landon Sims was the first Magnolia State player off the board, taken No. 34 overall by the Arizona Diamondbacks. His teammate, catcher Logan Tanner, went to the Cincinnati Reds with the 55th overall pick in the second round.

Both Sims and Tanner played pivotal roles in leading Mississippi State to capturing the 2021 national championship.
In 2021, Sims was a consensus first-team All-America selection and earned All-SEC honors after going 5-0 with 13 saves as the Bulldogs’ closer. He moved into a starting role for the Dawgs in 2022, making three starts on the mound before his season was cut short due to injury.

Tanner was an All-SEC selection in both 2021 and 2022. He batted .285 with eight doubles, seven homers and 38 RBIs during his junior campaign.

Southern Miss saw pitchers Dalton Rogers and Tyler Stuart taken on the second day of the draft. Rogers was picked in the third round by the Boston Red Sox and Stuart by the New York Mets in the sixth round.

On Tuesday, the final day of the draft, pitchers Landon Harper (14th round, Braves), Ben Ethridge (15th round, Twins) and Garrett Ramsey (16th round, Red Sox) were picked.

Rogers had six saves in 23 appearances last season. Stuart earned two wins in the Hattiesburg Regional and had a 4-0 record in 22 appearances.

Pitchers Derek Diamond (Pittsburgh Pirates) and Dylan DeLucia (Cleveland Guardians), as well as catcher Hayden Dunhurst (Kansas City Royals) were selected in the sixth round. Pitcher Brandon Johnson was taken in the ninth round, also by the Royals, and first baseman Tim Elko was snagged in the 10th round by the Chicago White Sox.

On Tuesday, outfielder Kevin Graham was picked by the Braves in the 14th round and shortstop Justin Bench in the 17th round by the San Francisco Giants.

In addition to the Division I products, five more Mississippi players from various high schools and colleges were selected.

South Panola High School outfielder Emaarion Boyd was also selected, by the Philadelphia Phillies with their 11th-round pick, and Tishomingo County High School shortstop Spence Coffman went to the San Diego Padres in the 19th round.

William Carey outfielder Chris Williams Jr. was picked in the 18th round by the Detroit Tigers.