LOOKING BACK: The mysteries and mishaps of 1219 Monroe St. 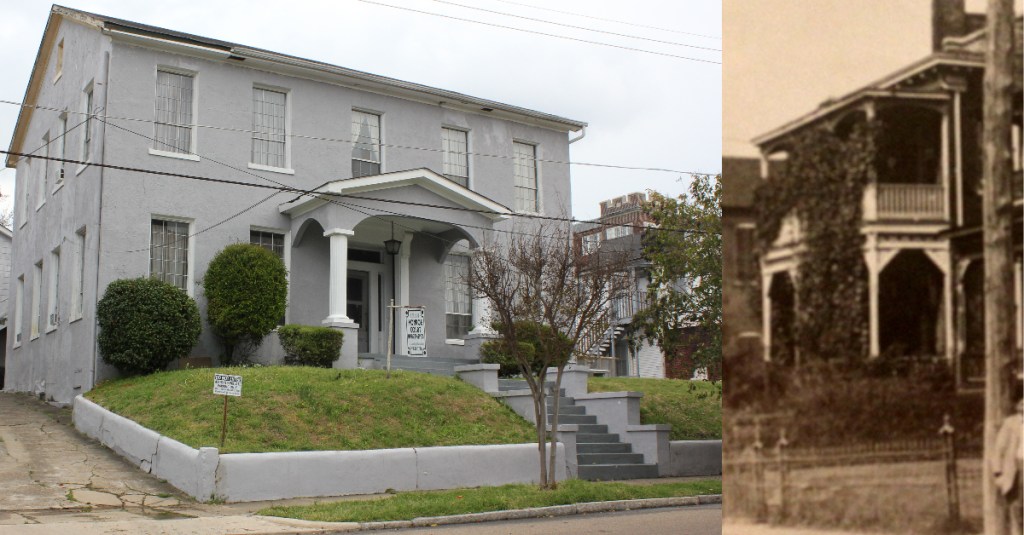 1219 Monroe St. in modern-day and in its early history. (Photos Submitted)

This two-story brick house was located on Monroe Street, third house from the corner of Clay Street.

It may have been built before 1870 by James and Caroline Hazelett. James was a commission (grocery) and cotton merchant and was the city inspector (for produce weights and measures) in the early 1840s. The Hazelett family experienced a number of tragedies during their years in Vicksburg. In October 1860, the Vicksburg Daily Whig reported that there had been a robbery on a flatboat — “a trading boat belonging to James Hazelett of this city, and in charge of his son was, we learn, robbed of$175 above Natchez a few days ago. The robbery was committed by a man employed as a cook on the boat. We were unable to learn if he was captured or not.”

In July 1874, the Vicksburg Herald reported that “Capt. James Hazelett has a vacant lot adjoining his premises, on which there are some shanties (corner of Clay). Some two or three months ago, three or four negroes who had come from Alabama to farm in the Mississippi Valley were run out by the overflow, and not having means to proceed further than this city on their return home, Capt. Hazelett kindly permitted them to occupy the vacant shanties on this lot.”

When Hazelett learned that these men had gotten registrations to vote in the city, he approached them telling them that they had no right to vote in the city or state because they were not citizens of the state, but rather Alabama. One of the men got angry and approached Hazelett with an ax, whereupon Hazelett drew his pistol and shot the man after he continued to advance on him.

In January 1879, Hazelett was himself killed by Deputy Sheriff H.H. Moore after Hazelett, who was running for the office of county treasurer, believed that Moore had changed ballots in the ballot boxes that he was the custodian of.

Words were exchanged between the two of them in a number of locations and then Moore saw Hazelett having a conversation under a lamp post on Washington Street, approached him and said “Jim Hazelett, you damned old hoary-headed… I am going to…” and at that moment, drew his pistol but the load being discharged prematurely, it entered the Nicholson pavement.

The second shot was fired just as Hazelett struck Moore with his stick. Moore then backed out of reach of Hazelett’s stick, near to the south door of Hardaway’s drugstore, where he again opened on his victim, firing three shots in rapid succession, killing him.

In May 1883, the Hazeletts’ son, Joseph, was killed by an Officer Cook after an altercation between the two men.

Caroline Hazelett died in the next year of stomach cancer. The Vicksburg Evening Post reported her death as follows: she was a “good, but sorely afflicted, lady.”

“She was the mother of eight children, two of which died in infancy. Joseph T. Hazelett, who was killed in this city in May 1883, was her son. The afflictions of this good lady and her family in the last few years have been harrowing in the extreme, and her mental sufferings much have reached that degree that breaks the heart and makes life utterly desolate. During the epidemic of 1878, two sons-in-law died of yellow fever. In 1879, her husband, the mainstay and support, we might say of all, was killed in personal difficulty.

“In May 1883, her second son was shot and killed also, and yet her terrible afflictions were not to cease, and she became the victim of the dreaded and torturing disease.”

The funeral took place from the home on Monroe Street. Family members continued to live in the house until 1887 when it was advertised for sale and was purchased in 1891 by S. Wachenheim who completed renovations to the house in 1892 and advertised rooms for rent.

He sold off the property to the south and the houses that were discussed in two earlier articles were built on the lot. The house eventually became the Monroe Apartments, the two-tiered porch was removed and other changes were made, but thankfully it still graces Monroe Street.