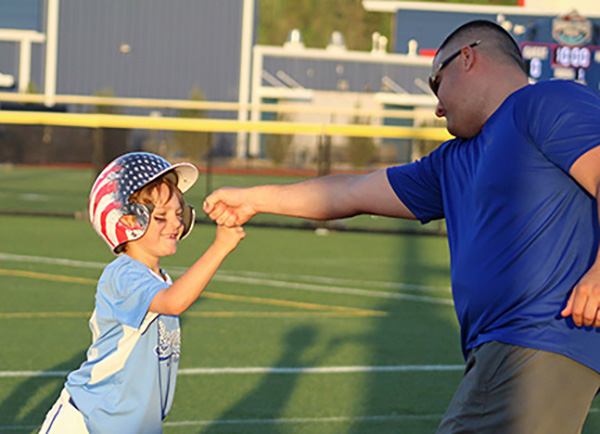 The Royals' Charlie Reeder gets a fist bump from coach Wesley Miller after getting a hit during an 8U baseball game in the Vicksburg Warren Athletic Association in April. The VWAA announced it has turned control of its league operations to Sports Force Parks. (Ernest Bowker/The Vicksburg Post)

Dustin Chamblee, the president of the Vicksburg Warren Athletic Association, recently announced that the league’s operations will be handled by Sports Force Parks going forward.

The VWAA has been run by volunteers since its formation in 2008 and has played its games at Sports Force Parks since the facility opened in 2019. The new organizational structure will see Sports Force Parks taking over the mechanics of running the league, while most other aspects remain the same.

“With Sports Force having their roots in Vicksburg now, after being open for a couple years, we had a couple meetings with them last year and this season about potentially taking it over,” Chamblee said. “Since we have to go through them for everything anyway — game scheduling, practices, field use — we just assumed why not hand it over to them and let them do what they do every weekend, which is run baseball tournaments. They can just as easily run a baseball season.“

Chamblee said the decision was spurred by fatigue among the league’s leadership, and a lack of volunteers willing to step into upper management roles. Some parents expressed interest in running individual age groups, he said, but none wanted to oversee the entire league.

Chamblee and Matt Mallard have served as the VWAA’s top officers for several years, and Chamblee said the demands of running the league were becoming overwhelming. Chamblee and Mallard also coach teams, have young children, and work full-time jobs.

In addition to the traditional spring season, the VWAA also took over the fall baseball league from the city of Vicksburg’s Parks and Recreation Department in 2020. That made the position of league president a year-round occupation.

“The VWAA has always been volunteer-based. It’s not a profit or a paid position, or anything like that. The last five years has been basically two of us running the league, and the last year has been one person, which is me,” Chamblee said. “The responsibilities and daily duties of running a youth league when you’ve got 400 to 500 kids a season can turn into a full-time job itself. It was getting a little much for us.”

Chamblee added that there was no shortage of volunteer coaches or players. Membership, he said, has grown in recent years.

“It wasn’t a lack of volunteers (as a whole). We’ve had plenty of coaches and we had 400 or 500 kids playing. Our goal five or six years ago was to grow it and I think we definitely did that,” Chamblee said.

Earlier this year, Chamblee and Mallard approached Sports Force Parks about handing over the keys to the league and the company accepted. Earlier this month the company took over the league’s website and social media accounts, and it will handle registration for the fall league that begins in late August.

More than 200 players are expected to participate in the fall league. Nearly 500 played in the spring season.

“From time to time we find these leagues in cities where it’s hard to get people to volunteer. The fact we are in a partnership in running the league, we find that when we can bring them under our umbrella there is just an enhancement to the experience,” said Will Spence, vice president of Sports Force Parks, Inc. The company operates its namesake complex in Vicksburg and several others around the country. “We can actually manage our park business better, with field usage and those kinds of things. Now there is a single point of communication for the parents when it comes to questions.”

The VWAA name will remain with the league — with a slight rebrand to “VWAA Baseball Powered by Sports Force Parks” — and so will most of the day-to-day experience. Games and practices were already at Sports Force Parks and the facility’s general manager Alex Gunn coordinated scheduling them all.

In taking over the league, Sports Force Parks, Inc. will handle all of the behind-the-scenes paperwork, scheduling and logistics that make the league run smoothly.

“There’s so much compliance stuff on the back side that nobody ever realizes when it comes to registration, and legal waivers, background checks and all that kind of stuff,” Spence said. “When we handle it as an organization there’s repetition. We get better at it and manage it better. When you have volunteers coming in, somebody has to learn the system. They miss things. We just find that, top to bottom, it’s a better experience for everybody involved.”

Other key aspects of the VWAA will also remain unchanged. At its core, Chamblee and Spence both said, it will still be a volunteer organization that relies on parents and the community.

“Top-end operations is what we’re going to be overseeing and executing. We still need volunteer coaches,” Spence said. “Some things where they had volunteer parents doing things like distributing uniforms or things like that, we’re going to be able to handle that. We still need mothers and fathers to volunteer to coach and learn the game. That’s what it boils down to, if you think about it.”

Chamblee said the VWAA’s agreement with the Warren County board of supervisors to oversee maintenance at the Culkin baseball fields will also stay in place.

The Culkin facility, located off Culkin Road on Mount Alban Road, has a half-dozen fields that the VWAA uses for practices. Since 2019 the VWAA has been responsible for basic upkeep such as cutting grass and minor repairs. Volunteers and coaches will still perform those duties, Chamblee said.

“We’ll still maintain those like we do now to give us a little extra space to practice. We still have tournament teams, too, that help out with maintaining those fields because they need somewhere to practice,” Chamblee said.

As part of the agreement between the VWAA and Sports Force, registration fees for the league will remain the same for now. The fee for the 2022 spring season was $60 for teeball and $80 for all other leagues. Spence did not rule out a slight increase as operating expenses rise in the future, but said the plan was to keep fees as low as possible.

The switch from VWAA to Sports Force is the latest evolution of youth baseball in Vicksburg. The VWAA was formed in 2008 when the Culkin Athletic Association and Vicksburg Baseball Association — the county and city leagues, respectively — merged.

The VWAA was created with the idea of bringing all of the area’s youth baseball activity under one organization, just as plans for a new sports complex was ramping up. It took another decade for the complex to be built, and a few more years for one of the original goals of the VWAA to become reality.

Chamblee said he has a “sense of ownership” of the league after leading it for so long, but it was simply time to pass the torch and move into a new era.

“Me and Matt both have kids that play. We’ll still play out there. It was more or less the time spent setting it up takes away from the time you get to sit on the other side of the fence and enjoy it,” Chamblee said. “Even when you’re out there coaching your own team, somebody’s out there texting or calling you with a rules question or there’s always something going on.”