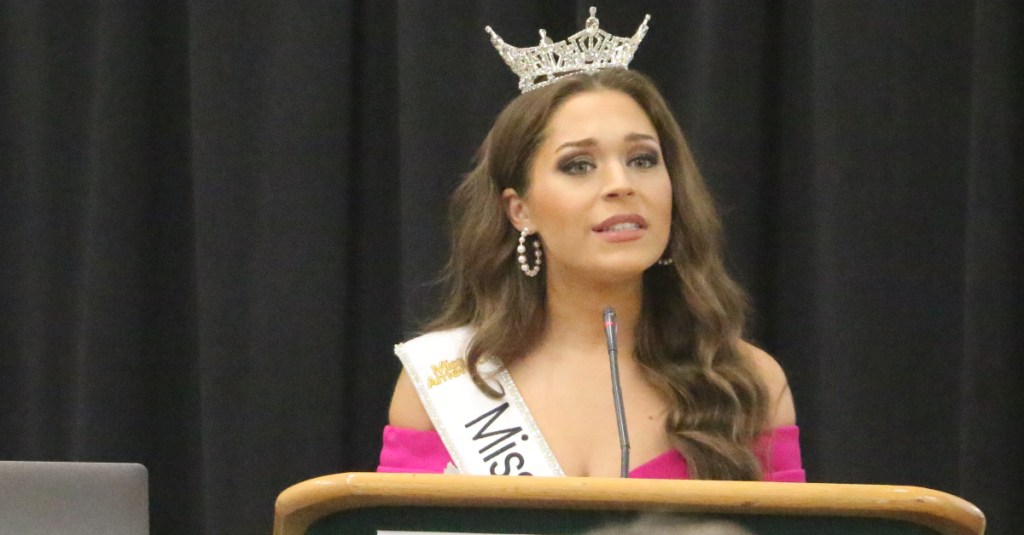 The newly crowned 2022 Miss Mississippi Emmie Perkins sang Brandi Carlile’s “The Story” for the talent portion of the competition, which was held in June.

And on Wednesday, during the monthly Vicksburg-Warren County Chamber of Commerce luncheon, Perkins, whose Social Impact Initiative is “Music is Medicine” shared a bit of her “story” by listing 10 song titles.

“It’s a playlist of my life story,” Perkins said, that represents who “Emmie is.”

From a piano Sonata by Johann Sebastian Bach played while still in her mother’s womb, to “Can’t Help Falling in Love” by Elvis Presley, which garnered Perkins first place in an Elvis competition to “There She Is” made famous by Bert Parks for the Miss America pageant, Perkins described how each of the songs she selected embodies her story.

Perkins, who represented Mississippi State University in the 2022 competition, is majoring in biological science and minoring in music. It was during her studies that she recognized there was a connection between the two.

“I realized there was a huge correlation between the brain and the healing power of music, thus sparking the inspiration for my personal platform, “Music is Medicine,” Perkins said.

Since 2019, when Perkins began promoting “Music is Medicine,” she said her platform has grown to where she is now working with groups in hospitals, nursing homes and schools, and is continuing to partner with additional organizations as well.

Currently, Perkins has already traveled 4,000 miles across the state since winning the title a month ago, and she said she will continue logging in the mileage since one of her goals while serving as Miss Mississippi is to visit a school in each county where a school is located.

In addition to promoting her platform in elementary and high schools, Perkins said she is working to get “Music is Medicine” on college campuses. She said she is also “vamping up” her website that includes educational resources and making positive playlists for communities to listen to.

“My dream is to supply everyone with music that I possibly can,” she said, which includes expanding “Music is Medicine” at the Miss America Competition.

The national competition will be held in December at the Mohegan Sun in Uncasville, Conn.

Perkins said she was still in the “planning stages,” of preparing for the national competition but has decided to sing a different song from the one she performed in the Miss Mississippi Competition.

“We have begun the process of exploring those (song) options. We definitely want to go with something kind of modern and fitting for the world we live in and that has an important message for all to hear, just like ‘The Story’ did,” she said.