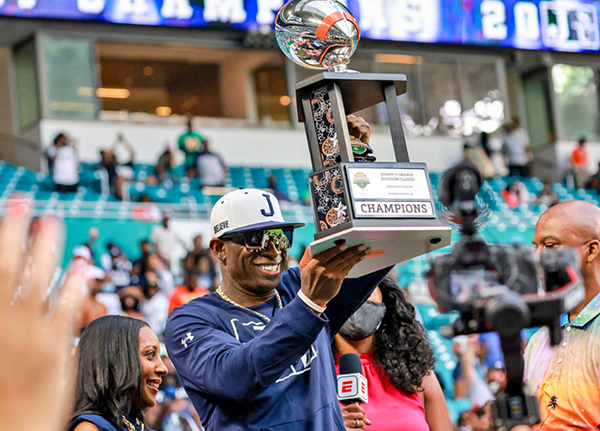 Jackson State football coach Deion Sanders holds up the trophy after beating Florida A&M in the Orange Blossom Classic last season. Sanders has brought attention and a number of top recruits to Jackson State in his two seasons with the program. (Jackson State University Athletics)

Jackson State football coach Deion “Coach Prime” Sanders has emerged as the most high-profile advocate for the league and HBCUs in general, but his colleagues are embracing potential change and celebrating the status quo as well.

Sanders touted the league’s “exponential growth” Thursday at the league’s media day amidst a challenging backdrop of name, image and likeness, the transfer portal and conference realignment.

“Something’s wrong with a plant that doesn’t grow, isn’t it?” the Hall of Famer said. “So everything should grow.

“And that’s my dream and my wish for the SWAC and for all these teams.”

The SWAC expanded to 12 members last year, adding Bethune-Cookman and Florida A&M. Sanders told ESPN that discussions on the possibility of forming an HBCU super conference have started on some level.

Commissioner Charles McClelland said if the SWAC did decide to expand, it would follow the path of the SEC and Big Ten and “only take a look at schools if they fit our academic and competitive profile.”

“I think that there’s already a super conference in HBCUs, and it’s called the Southwestern Athletic Conference,” McClelland said. “What we can do is continue to grow. So when you’re talking about super conferences, you’re talking about all of the major players within that region, and now I guess you can say nationally, being a part of that league. And that’s what the Southwestern Athletic Conference is.”

New Grambling State coach Hue Jackson applauds the idea of an HBCU super conference. The SWAC and MEAC are home to all but three of the Division I HBCU programs.

“I think we have to do just what everybody else is doing,” said Jackson, a former Cleveland Browns head coach. “Why shouldn’t we?

“If that’s what everybody else is doing to create more capital, more resources in the conference, I think we have to do the same. You have to follow the leader a little bit, and everybody is following the money so we should chase it too.”

Sanders made a splash on the field in leading Jackson State to an 11-2 season and its first league title since 2007. The Tigers averaged more than 42,000 fans at home games, an FCS record.

Sanders then brought in the nation’s top recruit, Travis Hunter, who is set to play both cornerback and wide receiver — just like his coach.

“A lot of people come up to me and tell me they appreciate me choosing an HBCU,” Hunter said. “It means a lot to a lot of people.”

The SWAC hasn’t been forgotten in the offseason, with help from Sanders. He even challenged Alabama coach Nick Saban — his co-star in commercials for an insurance company — after Saban brought up Hunter in discussing the use of NILs in recruiting. Sanders also has lobbied for more chances for HBCU players to catch the NFL’s eye. The school recently hosted a tryout for the new version of the XFL as well.