Smith inducted into the ERDC-WES Gallery of Distinguished Employees 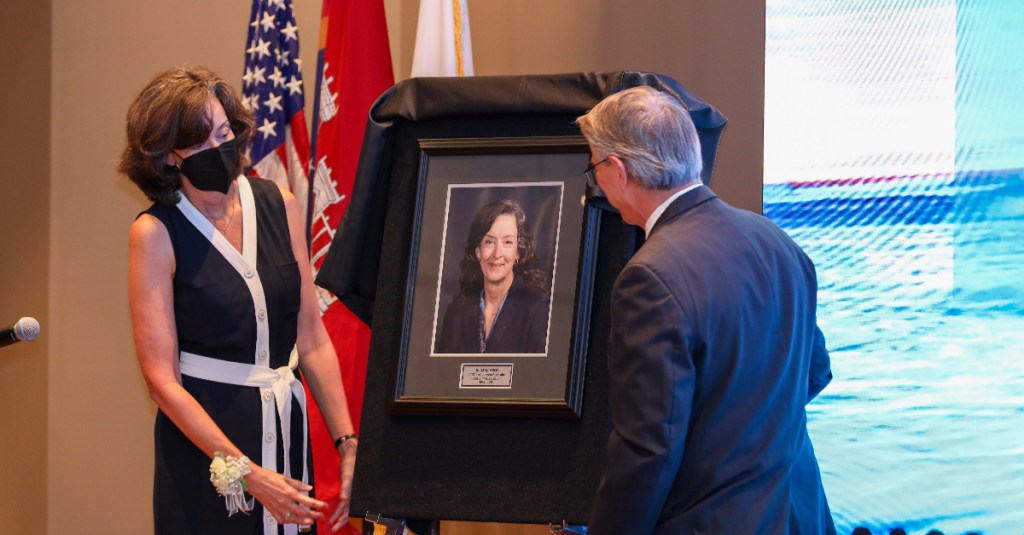 Dr. Jane McKee Smith and Dr. David Pittman, director of the U.S. Army Engineer Research and Development Center (ERDC), unveil an official portrait of Smith that will hang in the Waterways Experiment Station Gallery of Distinguished Employees. Smith was inducted into the gallery in a ceremony held at the ERDC’s main headquarters in Vicksburg, Mississippi, July 20, 2022. (U.S. Army Corps of Engineers photo by Khary Ratliff)

Smith joins more than 100 former WES employees whose significant career achievements left a lasting impression on both the ERDC and the nation.

“Jane has helped pave the way for all of us,” said ERDC Director Dr. David Pittman. “Today, she joins a select group of professionals whose lasting contributions have helped ERDC grow into a world-class organization.”

Prior to her retirement in 2021, Smith served as the Army Senior Research Scientist for Hydrodynamic Phenomenon while stationed at the ERDC’s Coastal and Hydraulics Laboratory. Her research focused on coastal hydrodynamics, including nearshore waves and currents, wave-current interaction, shallow-water wave processes and storm surge, with projects in theoretical and numerical studies as well as laboratory and field experimentation.

“Jane has been an inspiration not only to the CHL and ERDC workforce but across the entire profession — and world,” said Pittman. “There are only 40 senior scientists in the Army, and Jane was one of five at the ERDC. She’s like the rarest of rare breeds.”

Smith is a co-developer of the Steady-State Spectral Wave Model, a numerical model that is used throughout the world for coastal project planning and design. She was the wave modeling lead investigator for the Interagency Performance Evaluation Task Force evaluation of Hurricane Katrina and led the development of a system to quickly forecast hurricane waves, storm surge and inundation for the Hawaiian Islands.

“ERDC has been a wonderful place to work,” Smith said. “I worked on a lot of challenging projects, collaborated nationally and internationally and had the privilege to work on projects that made a difference to the world.”

With more than 200 professional publications and 6,800 citations to her credit, Smith is an internationally recognized engineer whose exceptional leadership in coastal engineering research continues to have a tremendous impact.

In 2019, she was the first woman from the U.S. Army Corps of Engineers inducted into the National Academy of Engineering and this year she was informed she will be the first female recipient of the 2022 International Coastal Engineering award from the American Society of Civil Engineers.

For more than 39 years, Smith was consistently a top contributor to the ERDC and has continued to serve in an emeritus role after retirement.

“Don’t wait for somebody else to take the lead,” she added. “Stand up — volunteer. Be the one that goes out and does the hard work that needs to be done, because this is the ERDC tradition.”