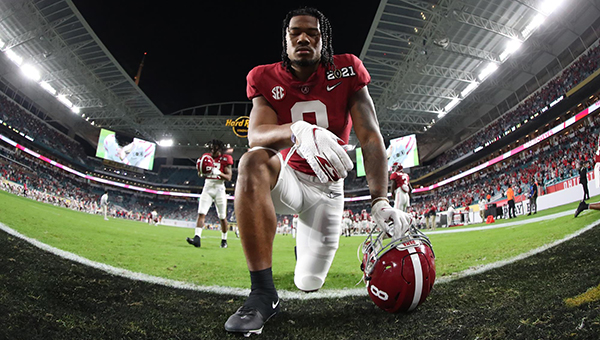 Former Alabama wide receiver John Metchie III announced Sunday that he has been diagnosed with acute promyelocytic leukemia and will miss the 2022 NFL season. Metchie was drafted in the second round by the Houston Texans and was set to enter his rookie season in the NFL. (University of Alabama Athletics)

HOUSTON (AP) — Houston Texans rookie wide receiver John Metchie III announced Sunday that he has been diagnosed with a form of leukemia.

In a statement posted on the Texans’ Twitter account, Metchie says he is getting treatment for acute promyelocytic leukemia, “the most curable form,” and expects “to make a recovery at a later point in time.”

“As a result of this diagnosis, I will likely not be playing football this season,” Metchie said. “My main focus will be on my health and recovery. … I cannot wait to come back stronger than ever.”

The Texans placed him on the active/non-football illness list, and he likely will not play this season.

Metchie was selected 44th overall in this year’s NFL draft. At Alabama, he had 96 receptions for 1,142 yards and eight touchdowns last season and was a second-team All-Southeastern Conference selection. He tore his left ACL during the SEC championship game.

Alabama coach Nick Saban said in a statement Sunday that the Crimson Tide football program will be behind Metchie “every step of the way” and that it is “a blessing that he is in a city known for great medical care and with an organization, in the Houston Texans, who will be with him throughout this journey.”