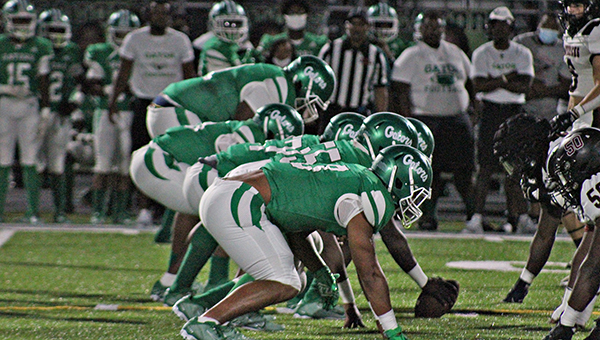 The Vicksburg Gators get ready to run a play in the 2021 Red Carpet Bowl against Germantown. The MHSAA announced Tuesday that all games this season in August and September will start at 7:30 p.m. instead of 7 p.m. (File/The Vicksburg Post)

High school football games will have a slightly later start for the first half of the 2022 season.

The Mississippi High School Activities Association announced Tuesday that its executive committee has approved a 7:30 p.m. start time for all varsity football games through the end in September.

In October and November, games will have a 7 p.m. start, which is when all games had previously started.

The Mid-South Association of Independent Schools also starts its football games at 7 p.m. St. Aloysius and Porter’s Chapel Academy play in the MAIS, while Vicksburg High and Warren Central are in the MHSAA.

The lone exception among Warren County’s two MHSAA teams is the Red Carpet Bowl. This year’s 60th anniversary edition will begin at 5:30 p.m. on Aug. 26 when Vicksburg plays Germantown in the first game of a doubleheader at Warren Central’s Viking Stadium. Warren Central and Forest Hill play the second game afterward, with an approximate start time of 8 p.m.

The MHSAA said in a Twitter post announcing the move that it is intended to “help players cope with the heat,” and will be used in conjunction with scheduled heat timeouts during the game.

All high school football games in Mississippi have mandatory heat timeouts that are called by officials at the six-minute mark of each quarter.