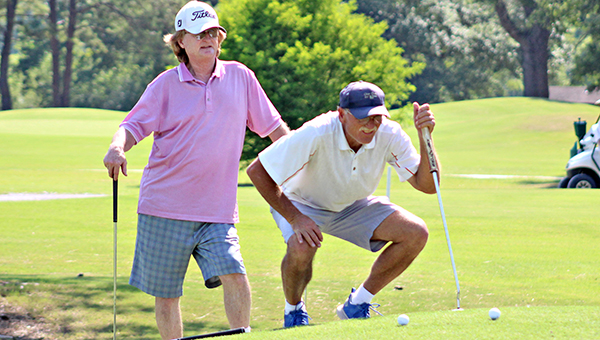 Bob Davidson, left, and playing partner Bob Burr size up a shot on the ninth hole during the first round of the Bud Light 2-Man Scramble at Clear Creek Golf Course in June. Clear Creek will host two major tournaments — the Warren County Classic and the Warren County Open — over the next two weekends. (Ernest Bowker/The Vicksburg Post)

“A club championship scares people to death if they don’t play competitive golf. So we changed to the Classic,” Ross said. “Just changing the name, the sign ups went through the roof. We had two people sign up and now we’ve got 40. It makes them feel like they’ve got a chance.”

The Clear Creek Classic is scheduled for this Saturday and Sunday at the county’s public golf course in Bovina. In previous years, only members of Clear Creek’s golf club — a membership allows for unlimited golf and other perks, rather than paying for each round separately — were allowed to register.

This year, Ross has loosened that restriction. The tournament is still for course regulars, but all pass holders and

The 36-hole tournament starts Saturday morning, and the entry fee is $50. There will be flighted divisions based on age for men’s players, and a separate division for women.

Tee times and pairings will be announced Friday on Clear Creek’s Facebook page. Players can register by calling the Clear Creek clubhouse at 601-638-9395 or by visiting in person.

The top five finishers in the Regular division and the winner of the Senior division will qualify for Clear Creek’s Warren County Cup team. Prizes in the form of golf merchandise will be awarded to the top finishers.

“It’ll be a fun weekend. We don’t have a whole lot of stroke play events, so you can test yourself and see where you stand,” Ross said.

The Warren County Championship, meanwhile, has been turned into the Warren County Open. Its participation requirements have varied over time, with the field limited to Warren County residents some years and to anyone with ties to the area in others.

For 2022, Ross opened it to all players no matter their residency status or origins. The new name, he said, was intended to reflect that.

The Warren County Open is scheduled for next weekend, Aug. 6 and 7.

The Warren County Open is also a 36-hole, two-day stroke play tournament. The cost is $150 per person and the deadline to register by calling or visiting the Clear Creek clubhouse is Aug. 5 at noon.

The entry fee includes a practice round, a cart, lunch both days, range balls, and drinks and snacks both days of the tournament. Tee times will start at 8 a.m. on Aug. 6.

The tournament will be flighted after the first round, with trophies and merchandise awarded to the winners of each flight. There are separate divisions for men 59 and under; seniors 60 and older; and women.
Besides seeing how the best players in Warren County stack up, Ross said the two-week stretch is a chance to showcase Clear Creek itself.

Ross took over as the course pro in March and has rearranged the layout of the clubhouse, added a food menu, and maintained the course. He said the period from April to June saw some of the highest play rates in the course’s history. Ross said he feels Clear Creek provides one of the best golf values in the region.

WARREN COUNTY OPEN
• Aug. 6-7, at Clear Creek GC
• Entry fee: $150
• Open to all players
• Tournament includes two age divisions for men, as well as a women’s division.
• The tournament will be flighted after the first round, with trophies and merchandise awarded to the winners of each flight.
• To register for either tournament, call 601-638-9395 or visit the Clear Creek clubhouse.