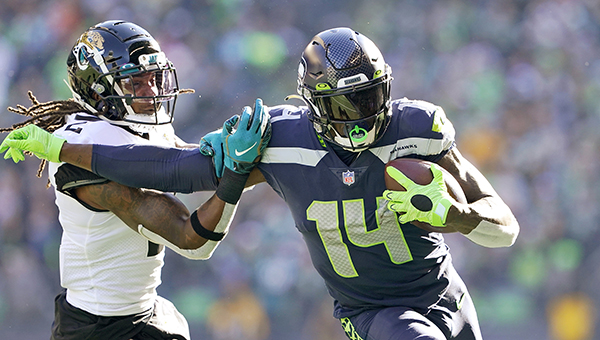 RENTON, Wash. (AP) — Now that the deal was signed and DK Metcalf had the security and financial reward he was seeking, Seattle’s young wide receiver could acknowledge he played some games with the Seahawks through the negotiation process.

“I was going to be here, as much as I bluffed to (GM) John (Schneider),” Metcalf said with a chuckle. “I wasn’t leaving, just to let you all know. I wanted to be here. I wanted to play here and I’m glad that we got something done.”

Metcalf became the latest in a line of wide receivers to land big new contracts when he signed a three-year extension with the Seahawks on Friday. The deal will pay the former Ole Miss star and Oxford native up to $72 million, includes $58 million guaranteed, and keeps him wrapped up through the 2025 season.

Getting an extension done with Metcalf was an offseason priority even with the Seahawks embarking on an offensive rebuild following the trade of Russell Wilson. The team has viewed him as a part of its core almost from the time he was drafted in the second round in 2019.

“We knew he was a guy that was going to be here, we had to have here for a long time in order for us to provide for the (fans) a championship team,” Schneider said.

Schneider said negotiations on Metcalf’s extension began in Indianapolis during the NFL combine, which was also when talks between the Seahawks and Broncos on the Wilson trade kicked into gear.

The Metcalf negotiations lingered into the start of training camp and included Metcalf skipping the team’s mandatory minicamp in June. But Schneider praised Metcalf’s patience and professionalism throughout.

Did those deals add stress to Metcalf’s situation?

“You’re always kind of adjusting as you go. So if you go back to the time we were in Indianapolis there are a number of things that happened that we had to keep adjusting as we moved forward to try to reward this young man,” Schneider said.

Metcalf’s deal also includes a $30 million signing bonus, the largest ever for a wide receiver. He’ll likely be back at the bargaining table in a few years seeking another deal since the contract will expire just after he turns 28.

“We had goals that we talked about, both on the team side and our side,” Metcalf said. “But this is just an amazing moment to where I do get to help my family and the state of Mississippi and the surrounding communities for years to come.”

Metcalf made $911,914 last season, when he had 75 receptions and a career-high 12 touchdown catches despite playing through a foot injury for most of the season.

His breakout season came in 2020. He became a full-time starter and had 83 receptions for a franchise-record 1,303 yards receiving and 10 TDs, and was selected as a second-team AP All-Pro.

Now he can get back to training camp practice after spending the first two days as a spectator.

“It makes a big difference in the momentum that you feel from a leader like this coming back to your club and knowing that he’s excited about it, and he’s thrilled to be here and all that kind of stuff,” Seahawks head coach Pete Carroll said. “It just adds to all of the energy of the group.”