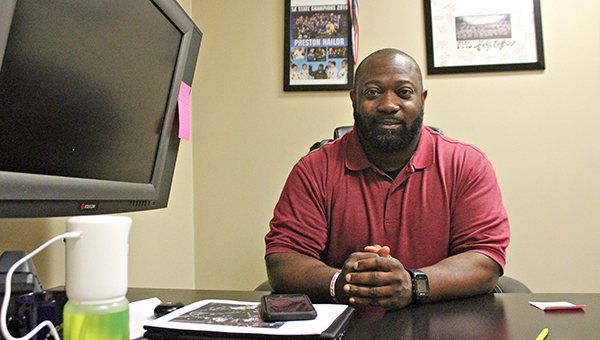 Seven years ago, Preston Nailor came home. Now, he’s going back to where he came of age.

Nailor is leaving his job as the Vicksburg Warren School District’s athletic director to take a position as an assistant principal at Velma Jackson High School in Madison County. He said the change was a chance to continue his professional growth in a different area of the educational system.

“It was a great opportunity. I spent six years in Madison County as a teacher and coach, so I know the area pretty well,” Nailor said. “It gives me a change of scenery, and to understand the educational system from a different view. That’s a part of my growth. I want to make sure I continue to grow in this career and learn the things that are going to help me help students.”

Nailor, a Vicksburg native, came to the Vicksburg Warren School District as an assistant principal at Warren Central High School in 2015 and was hired as athletics director in 2016. Before that, he worked in Rankin and Madison County, including a long stretch in the latter as a teacher and coach at Ridgeland High School. He won the 2010 MHSAA Class 5A boys soccer championship as Ridgeland’s head coach.

He said going back to Madison County, much like when he returned to Vicksburg, was a homecoming of sorts.

“I consider that a special place for me as well. It’s where I feel I grew up in education,” Nailor said. “For me to go back there and to take things I’ve learned here and implement them there, and to learn new things to better myself professionally is going to be a treat.”

Nailor’s six years overseeing the VWSD’s athletics and fine arts programs were rather eventful. The school bond issue that passed in 2018 led to major renovations of stadiums, gyms, running tracks, and baseball and softball fields at both high schools, all of which Nailor helped guide.

Nailor also pushed for the addition of several new varsity sports to the district’s offerings, such as bowling and e-sports; helped negotiate a district-wide apparel and equipment contract with Adidas; and the creation of the VWSD Athletic Hall of Fame.

On the field, the VWSD’s teams are also on an upward trend.

Vicksburg High’s football, girls and boys basketball, baseball and softball teams all made the MHSAA Class 5A playoffs during the 2021-22 school year.

Warren Central’s football team continued one of the longest active playoff streaks in Class 6A, while both of its basketball teams, baseball and softball teams also made the state playoffs.

Earlier this year, he was named the 2021 Class 4A/5A/6A Mississippi Athletic Administrators Athletic Director of the Year.

The VWSD began advertising for the vacant athletic director job this week.

“This is home. It hurts me to leave home. But I need personal peace. I need to step back and do things in a different way,” Nailor said. “I’m very thankful to the community. Very thankful to my bosses and to the school board for giving me the opportunity to be here. This is a job I never imagined that I would be in. And to be here for six years and enjoy every minute of it, and to see things change around this community, has been a treat.”

Nailor praised the school board and superintendent Chad Shealy, as well as the coaches he’s worked with over the years, for their support. He also said he was proud of the work he’s done with the VWSD, and feels like he’s leaving things in a good place.

“Just think about the amount of work that’s been put in,” Nailor said. “The amount of kids that now have D-I opportunities. The rising ACT scores and graduation rate. Kids that have the opportunity to work right out of high school. This has been a great place. I wish the school district and whoever is next the best, because this is still my home.”