Sports column: Help us pick the face of football in Warren County 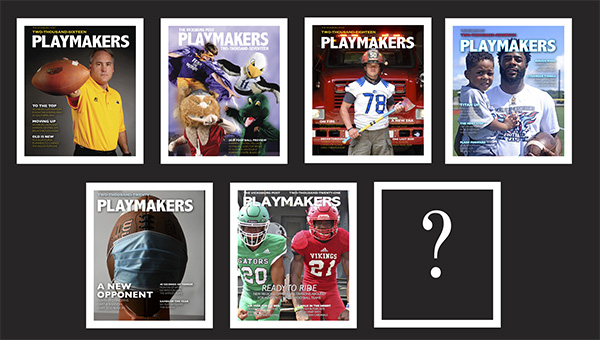 Who will be on the cover of the 2022 edition of our Playmakers football preview magazine? It's up to our readers to decide.

If you put your nose into the wind you can already smell the concession stand smoke. Put your ear to the ground and you’ll hear the thundering hoofbeats of 22 players clomping down the field and the slightly off-tune cover versions of “Sweet Dreams (Are Made of This).”

That’s right. Before school even starts, before the temperature even dips below 93 on a regular basis, football season is here.

St. Aloysius and Porter’s Chapel Academy started preseason practice last week, and PCA will play a preseason scrimmage this coming week. Their season openers are only three weeks away and the 60th annual Red Carpet Bowl doubleheader with Vicksburg High and Warren Central is less than a month from now.

The march toward football season also means, for me at least, the production of The Vicksburg Post’s annual “Playmakers” football preview magazine. It’s a fun, if arduous, undertaking since most of the work is condensed into a two-week period. Every time you dig out from under one pile of work there’s another one just as big sitting next to it.

With that in mind, we’ve decided to outsource at least part of the process this year. You, our readers, will pick the photo for the cover.

VOTE FOR THE COVER!
Voting in the 2022 Playmakers Cover Contest is open at vicksburgpost.com until Aug. 5 at midnight. You can vote once per hour. The winner will be featured on the cover of The Vicksburg Post’s “Playmakers” football preview magazine, which will be available Aug. 20.

All four are outstanding players and team leaders, and each one is deserving of the cover photo. But, to quote the cinematic classic “Highlander,” there can be only one, so we’re going to have a contest.

This week on our website, vicksburgpost.com, readers will be able to vote for their favorite player or just the photo they think looks the coolest. The one with the most votes, wins. The other photos will be thrown into a woodchipper (or more likely sit in a folder in case we can use them later on).

We’ll announce the winner the week of Aug. 15. The 2022 edition of “Playmakers” will be bundled in the weekend edition of The Vicksburg Post on Aug. 20, when the MAIS season begins and a week before the Red Carpet Bowl helps kick off the MHSAA season.

Shooting these photos was fun. We went a little gonzo with a couple of them, to the point where it’s not a stretch to say I placed my safety in a couple of the players’ hands. Thankfully, no one was injured in the making of this magazine.

Now it’s up to you to make the effort worth it. Vote early. Vote often. Tell a friend to vote. Tell your long-lost relatives to vote. Pick the guy who will be the face of football in Warren County in 2022 and join some esteemed company on the cover of a publication that is celebrating its 46th year.

Thanks for the help. I can use a break.