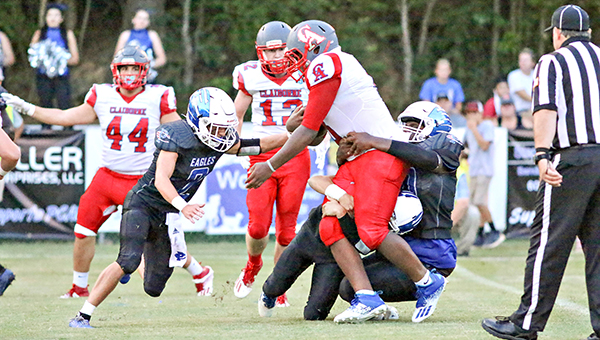 Porter's Chapel Academy defenders take down a Claiborne Academy runner during a game in 2020. Claiborne announced that it will not play football this season, which has sent PCA and Tallulah Academy scrambling to fill a hole in their schedules just a few weeks before the start of the 2022 season. (Walter Frazier/For The Vicksburg Post)

Porter’s Chapel Academy and Tallulah Academy have suddenly found themselves with a hole in their football schedules.

Claiborne Academy, which is a district rival of both MAIS schools, announced over the weekend that it will not play football this season. That left both PCA and Tallulah with open dates to fill in September, which coaches of both teams said is a difficult task a few weeks before the season starts.

The MAIS season begins Aug. 19. Porter’s Chapel was scheduled to play Claiborne on Sept. 9, and Tallulah was to play them on Sept. 30. Claiborne Academy is located in Haynesville, Louisiana.

“Their coach left and they waited too long to find a coach,” Tallulah coach Bart Wood said. “They waited so long that I can’t find anybody. I tried everything to find a game and couldn’t.”

Wood said Tallulah will take the open date and move on, but PCA coach Blake Purvis is still trying to find a replacement. It’s not an easy task since MAIS schedules were booked 18 months ago, and also because PCA plays 8-man football so any MHSAA schools that might have an open date are not compatible.

PCA played some 8-man games in 2019 and 2020 when it still was in the MAIS’ 11-man division. The team’s roster size and depth now, Purvis said, would make going the other way a bad idea.

“I’m still working on that right now. I’m trying to fill it and looking at some different options,” Purvis said. “There’s not really any options in the MAIS, so we’re having to look out of state in 8-man. There’s a lot of states that play 8-man. There are schools in Alabama and Arkansas, and some teams in Louisiana that are not in our association.”

Dropping Claiborne from the schedule will affect PCA and Tallulah in other ways besides having a week off. It will drop the number of district games from three to two — defending Class 2A champion Prairie View is the other team in District 3-2A — and could alter each team’s power points ranking.

The MAIS power points formula is used to determine wild card berths and postseason seeding. Each team is awarded points based on wins and losses, and the total is divided by the number of games played to come up with an average.

The formula includes a strength of schedule component that rewards playing better teams. Claiborne reached the Class 2A semifinals in 2021, so dropping a quality team from the schedule might sting a bit for its opponents.

Both Purvis and Wood, however, said the rest of their schedules should be good enough — and both expect their teams to be good enough — to overcome the lack of an extra data point in the formula. PCA and Tallulah both made the Class 2A playoffs last season and are expected to do so again this year.

“We’re on a power points system anyway, so it won’t affect that. It just goes down as an open game and we’ll divide by less,” Purvis said. “Even if we go out of state it’ll go down as an open date because it’s a non-association game.”

Wood was more concerned with how the open date would affect his team mentally. The Claiborne game was supposed to the seventh of 10 for Tallulah, so the open date could help the Trojans get healthy for the stretch run or blunt some momentum heading into it.

“If we have injuries like we did last year, it will be good,” said Wood, whose team lost several key players to injury late last season. “The kids lose focus sometimes, though.”