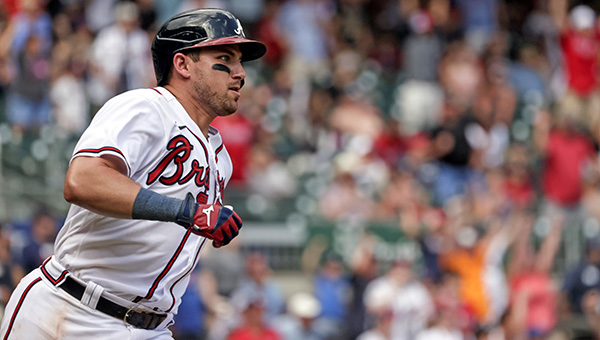 Atlanta Braves third baseman Austin Riley runs to first after getting a game-winning hit in a 1-0 win over Arizona on Sunday. On Monday, the Mississippi native signed a 10-year, $212 million contract with the Braves. (AP Photo/Butch Dill)

ATLANTA (AP) — All-Star third baseman Austin Riley and the Atlanta Braves agreed Monday to a $212 million, 10-year contract that starts in 2023, the most lucrative deal in team history and a surprise given he had three additional seasons under club control.

The deal with the 25-year-old Mississippi native is Major League Baseball’s 25th for $200 million or more. It includes a $20 million club option for 2033 with no buyout, which could make the agreement worth $232 million over 11 seasons.

Riley was the Braves’ first-round draft pick in 2015, straight out of high school from DeSoto Central. He played for the Double-A Mississippi Braves in 2017 and 2018 before making his major league debut in May 2019.

Riley capped the memorable month by delivering the winning double in the ninth inning of Sunday’s 1-0 win over Arizona, driving in Matt Olson to cap a three-game sweep.

“How he plays the game and the consistency with which he does everything, is unbelievable,” Braves manager Brian Snitker said. “He does everything right and checks all the boxes to be that guy.”

Riley is earning $3.95 million this year after losing in arbitration. He would have been eligible for arbitration ahead of the 2023, ‘24 and ’25 seasons, then could have become a free agent.

The deal provides long-term security for Riley while giving the Braves the ability to count on the slugger remaining a fixture in the middle of their lineup for at least a decade.

The defending World Series champion Braves were unable to re-sign first baseman Freddie Freeman after the 2021 season and could lose shortstop Dansby Swanson to free agency after this season. After failing to re-sign Freeman, the Braves acquired Olson from Oakland and signed him to a $168 million deal for eight years.

Outfielder Ronald Acuña Jr. is in the second year of a $100 million, eight-year deal. Second baseman Ozzie Albies is also under contract through 2027.

Signing Riley was among several moves the Braves made as they prepare for what they hope will be a return to the World Series.

On Monday the Braves made three separate trades to acquire starting pitcher Jake Odorizzi from the Houston Astros, corner outfielder Robbie Grossman from the Detroit Tigers, and infielder Ehire Adrianza from the Washington Nationals.

Atlanta, with the third-best record in the NL and going into Tuesday’s games trailing the East-leading New York Mets by 3 1/2 games, was seeking additional depth for the starting rotation. They hope they found it with

The Braves sent reliever Will Smith to Houston. Smith had 37 saves during the Braves’ 2021 championship season — and six more in the playoffs — but moved into a middle relief role this year and has struggled.

Getting Grossman cost the Braves minor league pitcher Kris Anglin, a 16th-round pick in 2021 who was playing for Class A Augusta.

Grossman had a .205 batting average, 13 doubles, two home runs and 23 RBIs in 83 games this season for Detroit.

The trade with Washington brought Adrianza back to the Braves. He played 109 games for them last season and hit .247 with five homers and 28 RBIs. He was most valuable as a pinch-hitter. He had a major league-best 16 hits off the bench, with three home runs and 12 RBIs.

To get Adrianza, the Braves traded minor league outfielder Trey Harris to the Nationals. Harris hit .238 for Double-A Mississippi this season. Atlanta’s 32nd-round draft pick in 2018 was the franchise’s Minor League Player of the Year in 2019. The 26-year-old has played 196 games for the M-Braves since 2019.

The Major League Baseball trade deadline is at 5 p.m. Tuesday.