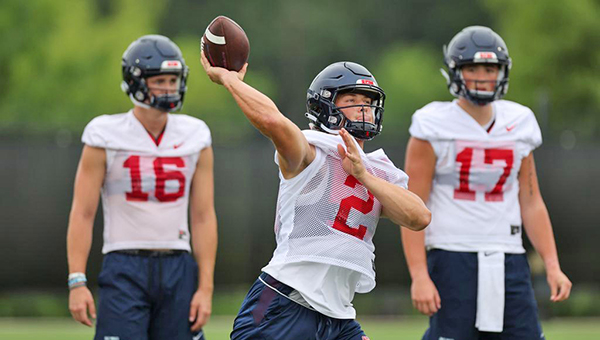 OXFORD — Ole Miss’ football team got back to work this week, with new faces in new places and a couple of key position battles to sort through during training camp.

Ole Miss brought in a total of 28 transfers during the offseason, including 24 portal transfers that ranked as the second-best unit in the country. At the team’s media day on Wednesday, head coach Lane Kiffin called it “a different era” that comes with the challenge of building team chemistry among players who haven’t been together for very long.

“Like we told the team in the team meeting, this is a different era nowadays in general. You don’t have programs where everyone has been there for years and understands what the expectations are,” Kiffin said. “It’s about how well we can get the players to buy into the values and principles of our organization and what we do here because we know that’s not just going to happen overnight. The challenge now is the faster we can do that, the better we’ll be.”

Ole Miss opens the season at home on Sept. 3, against Troy. The Southeastern Conference opener is not until Oct. 1 against Kentucky. That leaves some time, even once the season begins, for the Rebels to adjust to each other before the SEC schedule begins.

Kiffin said the adjustment extends to the coaches figuring out the new roster as well as the players learning how to mesh with each other.

“We just have to figure out the best people to play and the best systems to play in,” Kiffin said. “We don’t just run a system no matter what and make players fit into that. We look at the players and who’s the best to play and then form a system around them. That’s why year in and year out we’ve looked different on offense and defense.”

Several of the new faces are in the quarterback room. Two-year starter Matt Corral is now in the NFL, and Jaxson Dart and Luke Altmyer are the frontrunners to be his successor.

Altmyer, a sophomore from Starkville who was one of Mississippi’s top recruits in 2021, played in five games last season as Corral’s backup. He attempted 37 passes and finished with 192 yards. and one touchdown.

Dart is also a sophomore who transferred from Southern California. He passed for 1,353 yards and nine touchdowns, with five interceptions, while playing in six games in 2021. Dart was the Gatorade and MaxPreps National Player of the Year in 2020.

Kiffin said the quarterback battle would continue throughout training camp.

“I mean, we’d like to find out sooner rather than later, and like everything else we do here, we have analytics,” Kiffin said. “So, with the more information we have, the better we can make a decision. We can’t rush that.”

Kiffin added that filling the shoes of Corral, a veteran leader who played through several injuries to lead the Rebels to a 10-3 record and an appearance in the Sugar Bowl last season, won’t be easy. It’s also about a bit more than pure production.

“We’re trying to replace a veteran quarterback that played extremely well and at times, put an injured offense on his shoulders and was able to do it himself in order to win the game,” Kiffin said. “One of these guys isn’t going to fill that role exactly yet, so it’s going to take having other people around them to help with that.”

Restocking the defense is another training camp project. With six defensive players from last season currently on NFL rosters, including sacks leader and second-round draft pick Sam Williams, the Rebels are looking for production from both their returners and the transfers and recruits.

“I think this year on defense, you’re going to have a lot of that because we lost a lot of moving parts and some really key players,” Kiffin said. “We’re going to have some challenges there as we figure out what’s the best way to play and how many lineman and linebackers and defensive backs can do that for us.”