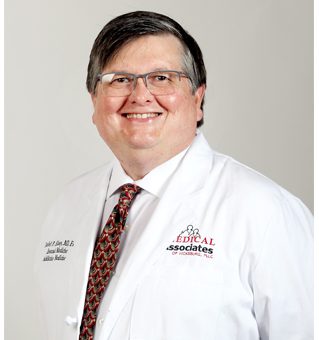 Edney began his remarks by thanking previous State Health Officer Dr. Thomas Dobbs and reflecting on his own career as a health care provider in the Magnolia State. A Mississippi native and graduate of the University of Mississippi and University of Southern Mississippi, Edney came to Vicksburg in 1991 as a medical practitioner. Since then, he has served hundreds, if not thousands, of patients in the West Mississippi and South Delta communities.

Thursday’s event, however, marked a broadening of focus from private practice — and the hypothetical addition of a few more patients.

“It took a lot to get me away from the practice that I love, the patients that I love, but this is a unique challenge and I felt the calling to do it,” Edney said in his opening remarks. “Now, as I leave private practice, I’m very excited to engage in my new public practice and look after the health care issues, and certainly the public health issues, of 2.9 million Mississippi patients. I take that responsibility quite seriously.

The doctor continued by stating some goals he’s set for his tenure as State Health Officer; chief among them, addressing Mississippi’s last-place reputation for matters of public health.

Saying he’s “felt the need to be a catalyst for change,” Edney cited some of the widespread health crises he’s witnessed throughout his professional and personal life, and outlined steps he plans to take as the state’s top doctor.

“Mississippi has been at the bottom of virtually every health care indicator and at the top of virtually every health disparity issue that impacts the various populations of our state,” he said. “And as a physician, I’m just tired of seeing it. I’m embarrassed as a physician that my service to West Mississippi and the South Delta has not moved the needle.

“I’m embarrassed that we continue with these numbers and have not seen improvement,” he added. “I just don’t believe that’s where we need to stay or where we have to stay.”

Presenting a series of graphic organizers, Edney highlighted Mississippi’s issues with obesity, heart disease, hypertension, opioid abuse and overdoses. The most egregious, he said, is that Mississippi leads the nation with the highest maternal-infant mortality rate.

“I refuse to accept the premise that we have to be last in every health care indicator and have such struggles with health disparities,” he said. “… I refuse to believe that our mothers and babies are just fated to continue to die at the highest rate in the nation.”

Edney said that, while many of these markers know no race or gender, it is a fact that Black mothers and babies in Mississippi are dying at three times the national rate.

He called for a number of solutions and an “all-hands-on-deck” approach to address Mississippi’s health care issues and move the state out of the last-place spot, with a goal of health care equity and literacy.

“I truly believe Mississippians don’t want to see our people dying at the highest rate in the nation,” he said. “… I’m not the first state health officer to care about this or work on this. All our health officers have been fighting against these numbers. I have the benefit of many lessons already having been learned, and partnerships and resources we’ve never had before.”

“Those who have gone before us have done the heavy lifting, and I’m grateful to be standing on a firm foundation to be working on this.”