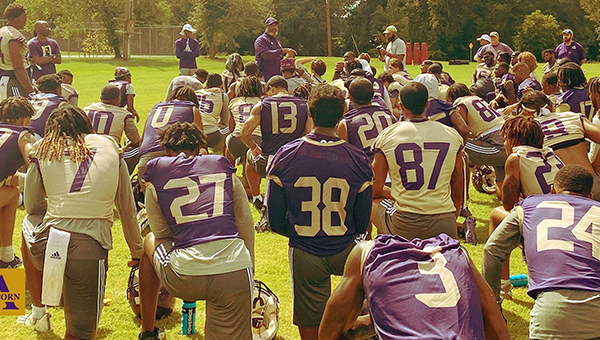 LORMAN — Alcorn State’s football team got back to work on Friday, and head coach Fred McNair said he saw a few big differences heading into his sixth season leading his alma mater.

Notably, the effect of offseason workouts on the first day of preseason training camp.

“Being able to work out in July was huge for the day’s rhythm,” McNair said. “The timing was better than it would have been in previous seasons. The conditioning of the guys was better. The way not as many people cramped up was big. Again, being able to have the guys on campus and get some conditioning in before camp started today … that was big for us.”

Temperatures were around 78 degrees for the start of practice, but quickly rose to the mid-80s. The Braves worked out for 18 periods, including three of 7-on-7 work. They’ll return to the field Saturday afternoon.

With the question, “Who’s taking over for Felix Harper behind center” being the obvious one heading into camp, co-offensive coordinators Elliott Wratten and Jason Phillips were both seen talking to the quarterbacks as they rolled through drills.

Phillips spent the majority of the time with the quarterbacks, and McNair also worked with them during individual group sessions.

Harper started for two seasons for the Braves — it would have been three, but the COVID-19 pandemic wiped out the 2020 campaign — and was the 2019 SWAC Offensive Player of the Year. He passed for 5,584 yards and 55 touchdowns in his career, including 2,478 yards and 20 TDs last season.

Among those vying to succeed Harper are redshirt freshman Tevarrius Adams, sophomores Kole Williams and Tre Lawrence, and graduate Makrkevion Quinn. All four were on the roster last season, but their meaningful playing time was sparse.

Assistant Coach Leroy Frederick is in charge of the receiving corps, as the group is spearheaded by senior CJ Bolar and redshirt seniors Juan Anthony Jr. and Manny Jones.

With the Braves’ defense bringing back two headliners in the form of Claudin Cherelus and Keyron Kinsler Jr., the defensive backs are expected to be a key unit. Cherelus and Kinsler are two of the four starters back on defense.

“I thought the defensive backs did a really good job today, despite the fact we didn’t have any interceptions,” McNair said. “That’s good and bad, in a way. But all in all, the defensive backs were in the right positions and made some great jumps on the ball for breakups.”

The offensive line will have a relatively new look, as Wratten was seen spending the majority of practice guiding the group through a multitude of drills.

“The offensive line looked solid, for the most part,” McNair said. “They are being asked to come in and make an impact quickly for us. And I think they’re handling that task well so far. I think we may be able to do some good things if they keep improving and protecting the quarterbacks.”