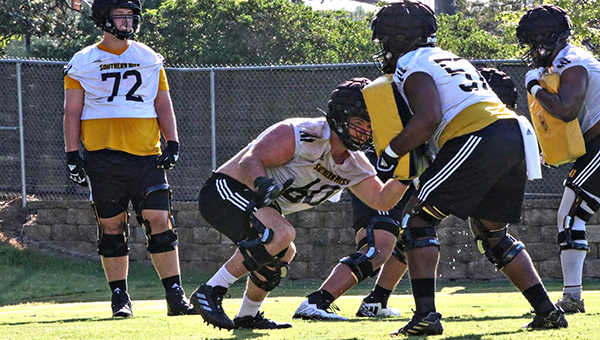 HATTIESBURG — As Southern Miss football coach Will Hall stepped in front of the assembled media Friday morning to assess the team’s first day of preseason practice, the difference between last year’s and this year’s team was clear.

“The biggest difference is talent,” Hall said. “It’s great to talk culture and all these cool words that everybody talks about, but at the end of the day, players win games. Alabama, Ohio State and Georgia are going to be really good this year because they have way better players than everybody else. So, the biggest difference in us from year one and to year two is that we have a lot more good football players now than we did.”

While he did say that the Golden Eagles were far from a finished product, Hall stated that this year’s team is in a much better position to compete. A big part of that equation is the additional scholarship players that bolstered the roster to a full 85.

During the opening practice, Hall saw his team run three full groups on both lines of scrimmage during team periods which “was a huge step forward for our program.”

The practice was the end result of a lot of hard work by Hall and his staff over the last eight months, through recruiting and offseason workouts, to get this team ready for today and the 2022 season.

Southern Miss won its last two games in 2021 to finish 3-9. A string of injuries throughout the season, most notably at the quarterback position, made for a difficult year. Thirteen players — many of them running backs and receivers — threw a pass for the Golden Eagles as Hall used the Wildcat offense to offset the lack of a true quarterback.

“We are reaping the rewards of a lot of hard work,” Hall said of his team’s first practice. “It is like a celebration from all the recruiting and the work that we have done and to be able to go out there and have a real college practice like we did today.”

The focus now is transitioning this program from a coach-led to a player-led program, and Hall sees that coming.

“We are at that point. You see a lot of leaders arising from Swayze Bozeman, Eric Scott, and Jason Brownlee was up here at 5:30 this morning with the music blaring and just fired up and ready to go to set the pace,” Hall said. “Also there is the familiarity with how we do things — the language in which we speak. The kids know what I am thinking a lot and they can repeat what I am going to say a lot, which is a positive. Because that is what a true program is when you can get to that point.”

The Golden Eagles return to the practice fields Saturday morning at the Joe P. Park Practice Facility. The season opener is Sept. 3, at home against Liberty.

As for the work on the first day of practice, Hall said that the squad got everything in place that they wanted to.

“We have an installation process that is a very thought through plan,” Hall said. “We wanted to put in all of our low red zone work from a passing and a run-game perspective. It was a good day of getting all that stuff in (place).”