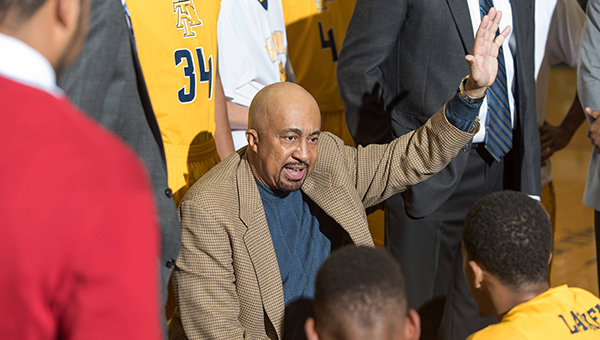 LORMAN — Alcorn State has added a respected veteran to its basketball bench.

“Cy is a veteran coach that I’m just excited about having on my staff,” Alcorn State head coach Landon Bussie said. “I know I can learn from him and become a better head coach just from having him within the program. He just brings so many things to us, and I can’t say enough good things about him.”

Alexander started his career by spending 11 years as an assistant Howard University. He got his first head coaching job at South Carolina State in 1987 and led the Bulldogs to the MEAC championship and NCAA Tournament in his second season.

He stayed at South Carolina State until 2003, when he moved on to Tennessee State for six seasons and then North Carolina A&T for four more.

He led North Carolina A&T to the NCAA Tournament in 2013, where the Aggies beat Liberty in the First Four before losing to eventual national champion Louisville in the next round. It was North Carolina A&T’s first 20-win season in 25 years.

Alexander resigned late in the 2016 season. He returned to coaching in 2020 as a special assistant at Tennessee State, where he was on the staff of one of his former players Brian Collins.

“Cy Alexander is big in the coaching community, and even bigger in the HBCU coaching world,” Bussie said. “I was able to spend some time with him recently, and I just listened to how he talked. I was high on him, and I made it a goal to get him to be a part of our program here at Alcorn State.”

Alexander is the second recent addition to Alcorn’s men’s basketball coaching staff. Last week, it was announced that Ben Mandelbaum had been hired as an assistant.

Mandelbaum spent the previous two seasons as the associate head coach for the men’s team at Division II Lander University in South Carolina.

“I think Benjamin Mandelbaum is a young guy that’s energetic, excited and hungry to be an assistant coach on the Division I level,” Bussie said. “Our plans are for him to come in the door and help this program with recruiting. He has a bright future, and I’m confident he’ll fit in perfectly with the team and enhance the Braves program moving forward.”

Bussie was excited about the new additions, as well as how they can help take Alcorn to the next level. The Braves finished 17-17 last season, won the Southwestern Athletic Conference regular-season championship, and Bussie was the league’s Coach of the Year.

“I know coming off the success we experienced last season, we can get over the hump in the SWAC Tournament with someone like Cy Alexander on our staff,” continued Bussie. “He is a legend in the HBCU community, and he knows how to win.”